On my way down to the SAANZ flyin at Tauranga, a call into Avspecs at Ardmore found some very interesting projects in progress. While they are not ZK registered, they have strong links to New Zealand and I think we can be proud that they have been restored to such an excellent standard here. 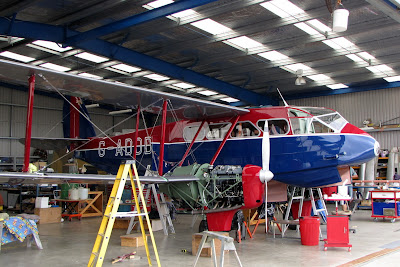 The first restoration was G-ADDD which is a DH 89A Rapide for Jerry Yagen of Virginia Beach. This is spectacularly painted up in the Guards colours of the Prince of Wales flight.

This is the second Avspecs restoration for Jerry Yagen, the first being Curtis P 40E 41-35927 which first flew in April 2003 and went on to win Grand Champion warbird at Sun'N'Fun 2004 and the Silver Wrench Award for the best fighter at Oshkosh, also in 2004. 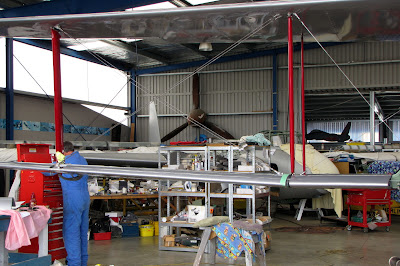 And hidden deeper in the hangar you can make out the shape of a Mosquito! This restoration is a product of the woodworking skills of Glyn Powell who over many years has made up male fuselage plugs for Mosquito fuselages - a monumental project in itself, and Avspecs. This aircraft is also being completed for Jerry Yagen and is expected to fly in late 2010/early 2011. When completed this will be the only airworthy Mosquito in the world. There is a much better photo of the Mosquito in the February 2010 edition of New Zealand Aviation News.