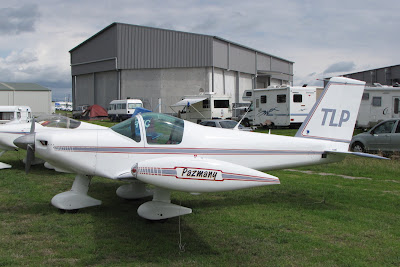 Trevor Parker's Pazmany PL 2 ZK-TLP was at the SAANZ flyin at Tauranga, looking immaculate as usual. This aircraft must have been at every AACA/SAANZ flyin that I remember and is a past Grand Champion. Trevor built ZK-TLP at Te Aroha during the late 1970's and 1980's. I was also living at Te Aroha during the late 1970's and I saw first hand the excellent standard of the build. The PL 2 is a much more complicated aircraft to build than the recent Vans models and was built from scratch using a set of plans.

ZK-TLP was first registered on 18/12/87 and it is powered by a Lycoming 0-320 engine of 150 horsepower which gives a 135 knot cruise. Trevor told me that the aircraft has now flown more than 1600 hours and has flown the entire New Zealand coastline apart from about 50 kilometres in the Catlins area.

There have been 2 other Pazmany aircraft built in New Zealand: PL 1 ZK-PAZ which was exported to Australia as VH-TEZ, and PL 4A ZK-PLF which is still current.
Posted by Sir Minty at 22:02