I include this post loosely with my Mustang theme. While it does not claim to be a replica Mustang it was inspired by the Mustang lines. 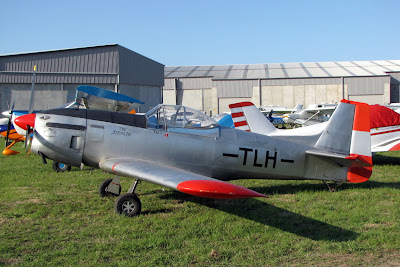 I was delighted to see the Horn TH 1 ZK-TLH at the SAANZ flyin at Tauranga, because I have been aware of it stealthily lurking around for more than 20 years and this was the first time I had seen it. Tom Horn built this aircraft at Levin in the 1980's and it was one of the first indigenous design microlights in New Zealand. As noted above its lines were inspired by the Mustang and you can see this in the canopy and the tail. It is surprisingly big for a Class 1 microlight. It was first registered by Tom Horn in April 1989, and later sold to his brother Graham Horn at Taupo. More recently it has been bought by Brian Taylor of Whangarei who seems to get about more widely in the aircraft.

Does anyone else have any more information on this aircraft?