Falcos at SAANZ Tauranga Fly In

The Falco (Italian for Falcon) was designed by Stelio Frati in Italy in 1955, and it certainly has stood the test of time as an aircraft with wonderful lines - try putting some other 1955 aircraft up against it! It has been called "The Ferrari of the Skies" and it surely has Italian flair. In the 1970's the design was purchased by Sequoia Aircraft Corporation of Richmond, Virginia, USA. They have produced kits for the Falco up until today.

The Falco provided the inspiration for the New Zealand designed and built all composite Furio.

Two of New Zealand's Falco's were at the recent SAANZ flyin at Tauranga, looking stunning. 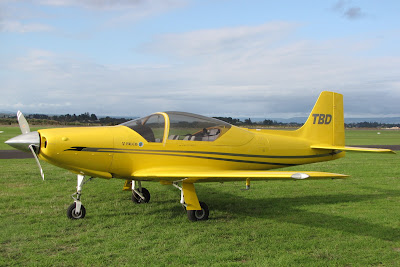 New Zealand's first Falco was ZK-TBD which was built by Syd Jensen at Kerikeri. Commenced in 1980 progress was rapid and outstripped the supply of kits from Sequoia Aircraft. It was completed by 1984 but was not registered until 15/4/86. The aircraft moved with Syd to Taupo where I saw it in Peter Dyer's hangar in the 1990's painted white. It was sold to Graham Hodge of Christchurch on 1/2/95 and it was based at West Melton. Enter Giovanni Nustrini of Technam Aircraft whose father Luciano bought his Falco I-ERNA to New Zealand and registered it as ZK-RNA in 1986, and who was tragically killed in the aircraft in 1999. Giovanni Nustrini really wanted a Falco of his own and he bought ZK-TBD on 18/5/02. He then tidied it up and painted the aircraft yellow.

There are interesting stories to be told about Syd Jensen and Luciano Nustrini in other posts. 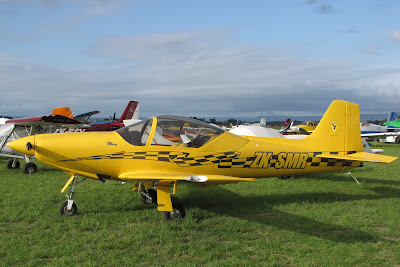 And the other North Island Falco at Tauranga was George Richard's ZK-SMR, also in yellow and for sale. ZK-SMR was first registered on 9/12/03 and is based at Parakai. George has a very good website detailing the building and flying of his Falco - go to http://falco.co.nz/ .

There are 2 other Falco's currently registered in New Zealand - Arthur Dovey's ZK-JPG at Wanaka, and Bruce Fraser and Russel Woods ZK-FWA at Christchurch (I am not sure if this aircraft has been completed).

Can anyone provide more information on Falcos in New Zealand?