Furio LN27 RG: By Falcomposite Out Of Falco

In my last post on Falcos at the SAANZ Flyin, I made the comment that the Furio was inspired by the Falco.

The Northern Microlight Flyin at Parakai yesterday offered a good opportunity to compare the old and new "thoroughbreds". 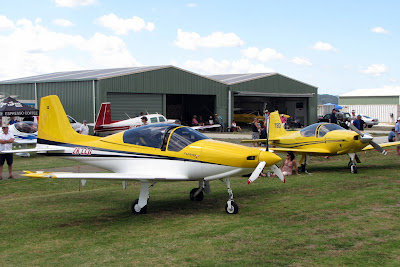 In this view you can see the close resemblance between ZK-LLG and ZK-TBD. Both aircraft are dimensionally very similar with the Furio being about 170mm longer while the wingspans are almost identical. Both have top speeds of around 220 mph with 180 HP motors and rates of climb in excess of 1000 fpm. The Furio is around 60 Kg heavier and has 400 Kg of useful load against the Falco's 300Kg. However the big difference is that the Furio is made from a small number of pre moulded carbon fibre components whereas the Falco is made from wood which needs a lot of work to achieve the compound curves.

15 Furio kits have been sold to date, in counties including Australia, South Africa and the USA. At least 3 other kits have been sold in New Zealand, with the second aircraft, Neil Sutherland's ZK- NJS close to being finished at the Falcomposites hangar at Ardmore. This aircraft is painted Ferrarai red. Another example is being built in Queenstown and is also well advanced. 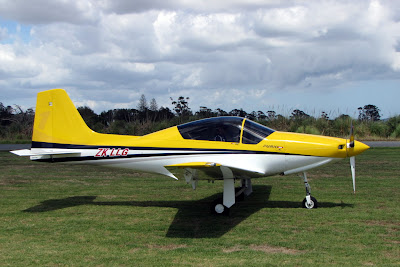 The Furio's lines are every bit as stunning as the Falco's but modern moulding techniques have made attaining the curves much easier. ZK-LLG even has the name "Furio" moulded into the top of the wing without effecting the smooth surface! 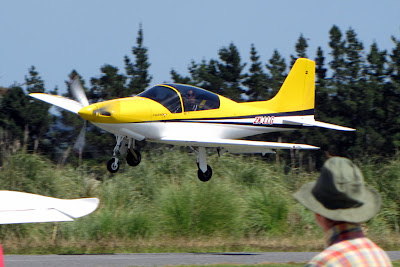 And finally another view of the Furio landing after a its demonstration at Parakai.
The Furio has a website if you are interested: http://www.falcomposite.com/