Another Mustang replica at the SAANZ flyin at Tauranga was the Papa 51 Thunder Mustang. The Thunder Mustang is a really interesting aircraft that is a three-quarter scale fuselage mated to five-eigth scale wings. It can climb at twice the rate of a P 51 Mustang and has the same Vne as a the full size version at 439 knots! The performance is due to a magnificent V 12 Falconer engine that produces 640 HP from its 601 cubic inches! The original kit was produced by Papa 51 Ltd who are no longer in business. Only 37 kits were produced and 27 were delivered. The aircraft is constructed mainly from carbon fibre. 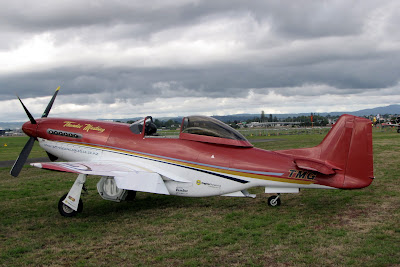 ZK-TMG was built in South Africa as ZU-TMG and was shipped to New Zealand in 2005. It was first registered on 23/2/05 and is owned by the Kiwi Thunder Group Ltd of Manurewa.

The aircraft has its own website http://www.kiwithunder.com where you can hear the V 12 engine in full song! Amazing!