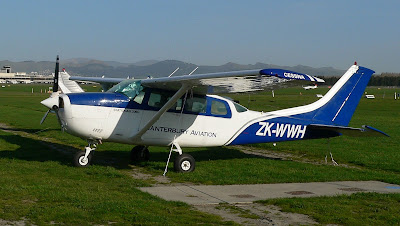 The Cessna U206G ZK-WWH , c/n 03550 , now carries Canterbury Aviation titles and was tied down outside their office at Christchurch today.
And off course everyone knows that this began as ZK-MCH in December of 1976 and went to Mount Cook & Southern Lakes Tourist Co Ltd, and as a floatplane it overturned in Earshell Cove on 15-03-1977. Its registration was cancelled on 05-04-1977 and the remains went to Whirl-Wide Helicopters of Timaru. It was rebuilt by Central Aircraft Maintenance at Hamilton and re-registered as ZK-WWH for Whirl-Wide Helicopters on 03-08-1977. At least half a dozen owner/operators followed until it was damaged on take off at Queenstown in August of 2005. It was rebuilt at Nelson as a part time project and became listed with John & Lorraine Horrell of Nelson, flying again on 13-11-07, and has been leased to the Nelson Aviation College.