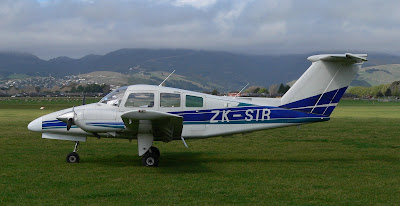 Beechcraft 76 Duchess ZK-SIR , c/n ME-222 , arrived in NZ on 17-03-1995 from Norfolk Island and points further west as VH-JGP. It was planned to list it as ZK-JGP but this did not occur and it became ZK-SIR instead on 10-04-1995 for David Martin Ross of Rotorua. Some eleven operator changes later it became listed to Eagle Flight Training Ltd at Papakura on 31-08-06. It was noted for sale with Premi-Air earlier this year. It ferried out of NZ via Kerikeri on 04-07-08 to Norfolk Island and then on through Lord Howe Island to Gold Coast on the 5th. It is now listed to Sweaton Investments Pty Ltd of Tugan, Queensland and is operated by Australian Wings Academy.