The completion of the last Vickers-Supermarine Spitfire Mk 24 in 1947 bought to an end eleven years of Spitfire construction during which over 22,500 examples were produced and over those eleven years the aircraft was developed possibly more than any other aircraft in history.

More than 50 years later, in the late 1990s, Australian aircraft engineer Mike Mike O'Sullivan wanted a Spitfire but couldn't afford a real one so he built a 75% scale replica that first flew in 2001.  He then formed Supermarine Aircraft Company in Brisbane and produced the production prototype aircraft which first flew in 2004.  This aircraft was designated the Supermarine Spitfire Mk 25 with the blessing of the descendants of the original Supermarine Aircraft Company.  In 2010 the company moved to Cisco Airport in Texas where it has further developed the aircraft and produces kits.

The Spitfire Marks 25, 26 and 26B are all aluminium with a monocoque fuselage.  The original Mk 25 was 75% scale single seater and is no longer produced while the Mk 26 has a 80% scale fuselage with a rather cramped rear jump seat with the original 75% wings, and the Mk 26B is a 2 seater with the option of dual controls in an approximately 90% scale fuselage, but still using the 75% wings.  A variety of engines can be fitted from 6 and 8 cylinder Jabirus to various automotive  V6 conversions to the 400 HP Chevrolet LS2 V8 engine conversion.

The next type of sport aircraft to be registered here was the Supermarine Spitfire replica and five examples of various marks have flown in New Zealand to date: 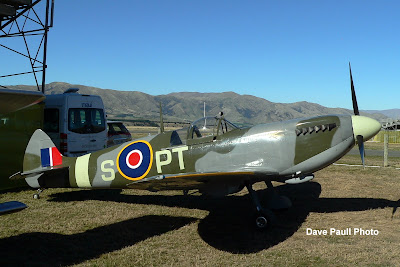 The first example to appear was ZK-SPT (c/n 070) which is a Mk 26B model that was registered to Harding Enterprises Alpha Ltd of Wanganui (Richmond Harding) on 30/8/10.  The airframe was built from a kit by Ivan Campbell of Campbell Aero Classics (the New Zealand agents for Supermarine Aircraft) at Loburn, and the engine and systems were installed at Wanganui.  It has a 400 HP Chevrolet LS2 V8 engine.  It is photo'd above at Wings Over Wanaka on 5/4/12 where you can see the shadow of the famous elliptical wing.  It suffered damage in a wheels up landing at Wanganui Airport on 1/10/12 but the damage was minor and it was repaired. 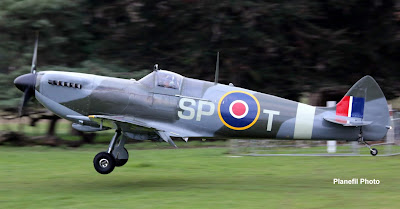 On 13/2/17 ownership changed to Richmond R Harding of Wanganui.  Along the way the spinner was repainted black as can be seen from this photo taken at a Flat Hills flyin on 11/6/17. 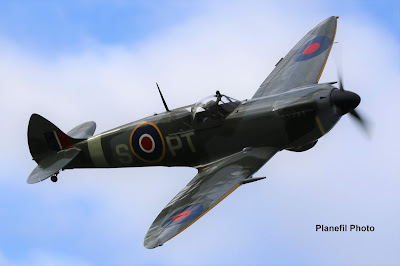 There is a video of ZK-SPT operating off Richmond Harding's airstrip near Wanganui at https://www.youtube.com/watch?v=jw2hNOLr4JQ  where you can hear the sound of the big V8 engine, that I reckon sounds real good. 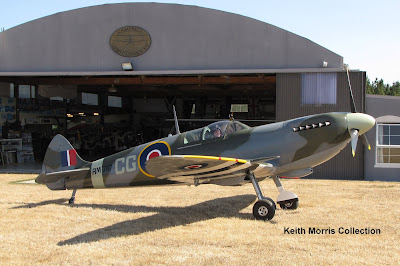 The next Supermarine Spitfire to appear was ZK-CGV2 (c/n 52) which is Ivan Campbell's personal aircraft which was first registered to him on 11/12/15.  It is also a Mk 26B model and has dual controls fitted in the back seat.  Ivan spent a lot of time working on the cowling and canopy to ensure that their lines were more true to the original Spitfire and it looks really nice.  It also is powered by a Chevrolet LS2 400HP V8 engine.  The photos above and below were taken at Ivan's property Loburn Abbey on 8/2/15, before its first flight. 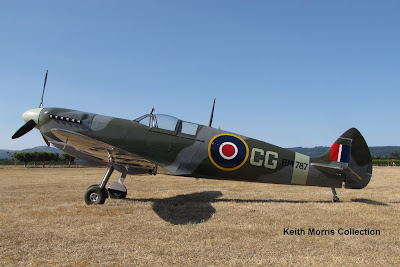 ZK-CGV2 is painted in the colours of Group Captain Colin Gray personalised aircraft RM787.  I have posted more details about this aircraft and Colin Gray at: http://nzcivair.blogspot.com/2015/05/supermarine-spitfire-mk-26b-and-other.html 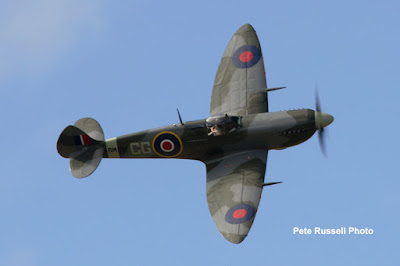 A nice shot of ZK-CGV2 taken at the West Melton flyin on 8/9/18, showing off the Spitfire's classic lines. 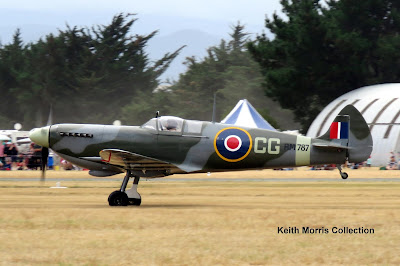 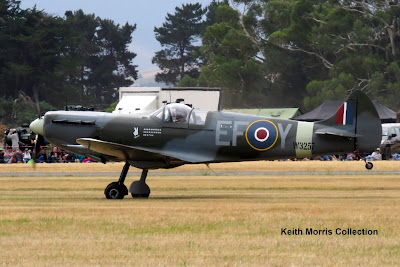 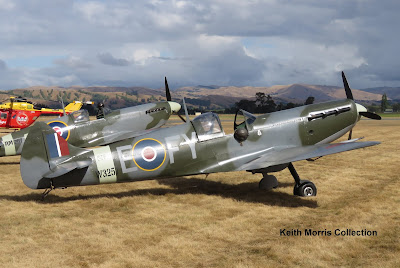 ZK-EFY2 is painted to represent W3257 which was a Spitfire Mk V of 611 Squadron, RAF in 1941.  This aircraft was flown by Lt Eric Lock, DSO, DFC and Bar who claimed 26 victories in one year, and they are painted on the aircraft.  Flt Lt Lock was posted missing with his aircraft on 3 August 1941. 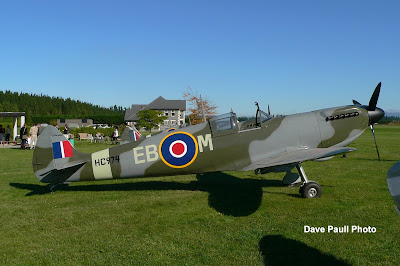 Next up was another Mk 26B model which was built by Ivan Campbell at Loburn Abbey.  ZK-MEB (c/n 72) was first registered to Ivan Campbell on 28/11/16 and is also powered by a 400 HP Chevrolet LS2 V8 engine.  It is painted as HC974 but I do not know the history of the aircraft it represents. It is photo'd above at Loburn Abbey on 22/4/17 at a gathering of four Supermarine Spitfire replicas. 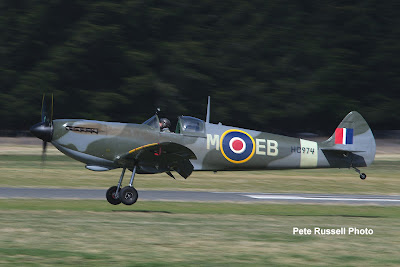 It is photo'd above at the Canterbury Aero Club's 90th Anniversary flyin at West Melton, on 8/9/18. 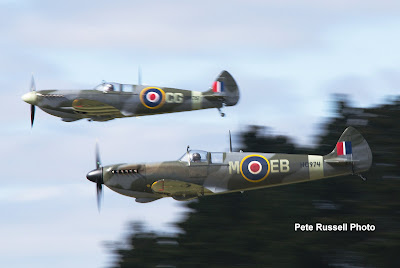 On 6/11/18 ownership changed to Hayden J Cowan of Greta Valley. 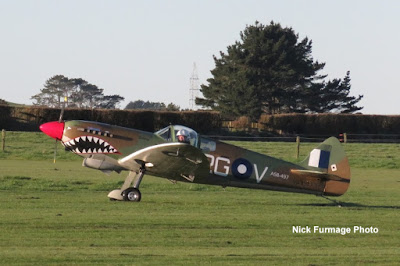 Most recently a Mark 25 Spitfire has been imported from Australia and has been registered ZK-RGV (c/n 011) to Gary D Marsh of Inglewood (on 14/6/19).  It is powered by a 6 cylinder Jabiru engine.  Surprisingly, it is registered as a Class 1 microlight! 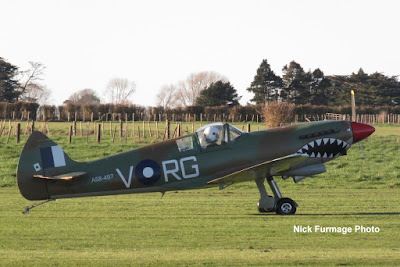 The aircraft was built by Peter Yates of Perth WA and was registered as VH-XST on 26/2/07.  It is painted to represent the aircraft A58-497 of 457 Squadron RAAF which was the aircraft of Wing Commander R H (Bobby) Gibbes DSO, DFC and Bar, OAM.  It carries the name "Ecstasy". 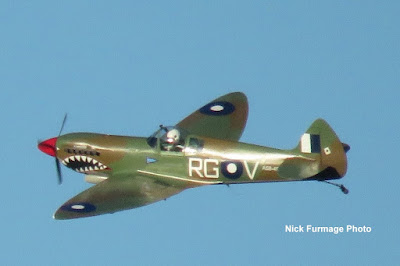 This is the original 75% scale replica and it therefore has the purest lines of the Supermarine Spitfire replicas.  If you look at the lines of the larger Mark 26 and 26B fuselages which are 2 seaters, you will see that the cockpit is further forward to keep the centre of gravity within limits (and of course their wings are relatively smaller).

There has been one more Supermarine Spitfire replica registered in New Zealand.  ZK-LEJ (c/n 57), a Mk 26 model, was registered on 8/5/08 to Paul D Bayly of Auckland.  I believe that it was being built as a project on public display at MOTAT for a time and it was intended to be powered by a Chevrolet LS2 V8 engine.  I saw the partly built fuselage covered up in a hangar at Ardmore quite a few years ago and some progress has been made since.  On 14/6/18 it was re-registered as ZK-EDM to Paul D Bayly of Wanganui.  So we will have another Supermarine Spitfire in New Zealand skies in the future.