Mike Whittaker is a prolific British sport aircraft designer who is up to his MW-10 aircraft.  The MW-6 is his most successful design and was developed from the single seat MW-5 Sorcerer.  It can be built in 2 versions - the MW-6T tandem 2 seater and the MW-6S side by side 2 seater.  Construction is of aluminium tubing with fabric covered wings and flying surfaces.  Its length is 15 feet, the wingspan is 32 feet 9 inches and the wing area is 164 square feet.  Empty weight is around 190 Kg (419 pounds) and the MAUW is 390 Kg (860 pounds).  I am not sure what engine is fitted to ZK-MWS but with a Rotax 503 the aircraft cruises at around 63 mph, and the stall speed is around 35 mph.

We have only had one Mike Whittaker MW-6S in New Zealand and we may not have any more. 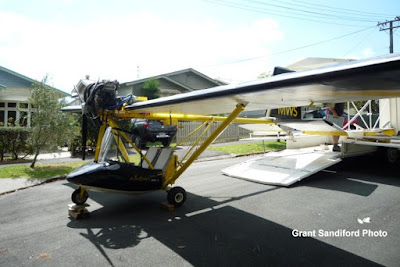 ZK-MWS (c/n GS 1) was built by Grant Sandiford of North Shore and was first registered to him on 21/5/10.  The photos were taken during a trial assembly from its very well engineered trailer (see: https://nzcivair.blogspot.com/2010/06/mike-whittaker-mw6s-zk-mws-rigging.html ). 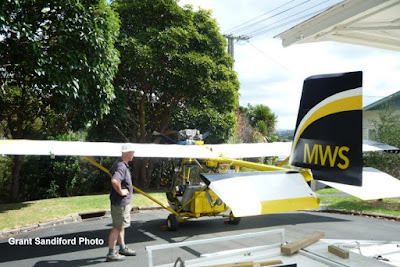 The aircraft was cancelled from the New Zealand civil register on 20/6/16 as withdrawn.  I understand that it had some handling problems, and I am not sure if it ever flew but it did suffer damage in an accident at Mercer on 1/10/0\15.