In line with the increasing power trend, most of our recent Titan Mustangs have been powered by the 3.5 litre Honda V6 engine which produces around 245 HP plus.  We have had four Honda V6 powered Titan Mustangs to date, as follows: 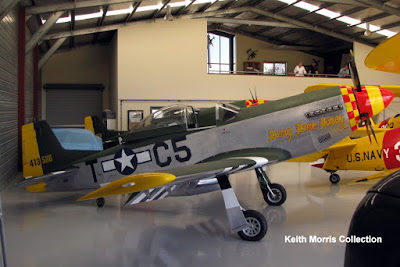 Marty Cantlon of Tauranga built his V6 Honda powered ZK-MPC (c/n M05XXX5OHK0062) alongside Mike Dean (ZK-MJD2) and it was first registered on 3/12/10.  Both the Mustangs live in Marty's and Mike's immaculate hangar at Tauranga airport where the above photo was taken on 27/1/12. 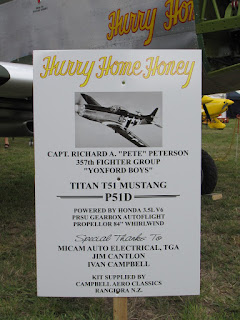 It is painted to represent the aircraft of Captain Richard A Peterson of the 357th Fighter Group USAAF who named his aircraft "Hurry Home Honey".  You can see more details above - click to enlarge. 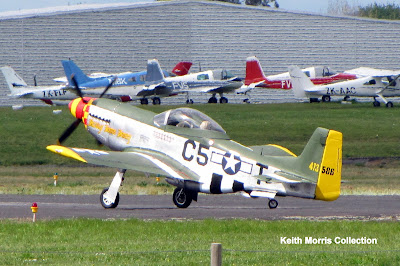 The above photo shows Marty and passenger departing from the Mosquito KA 114 Airshow at Ardmore on 29/9/12.

You can see more on Marty's Mustang including a neat video at https://www.slashgear.com/p-51-mustang-replica-plies-the-skies-with-honda-odyssey-v6-power-16405036/ 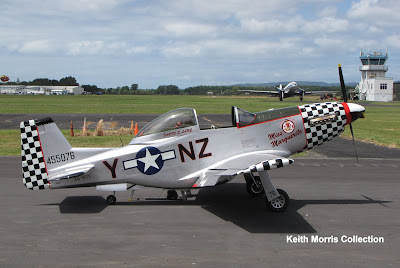 The next Honda V6 powered Titan Mustang was ZK-WZY (c/n 0076) which was registered to Paul McSweeny of Pioneer Aero Ltd on 21/7/15.  Its colour scheme is based on the Mustang "Big Beautiful Doll" of the 84th Fighter Squadron, 78th Fighter Wing, USAAF but the details are fictitious.  The aircraft was built at Pioneer Aero for an Australian customer: David S Lane and his name is on the aircraft as well as "Lane's Victory"  The aircraft is named "Miss Marguerite" and the detailing is of a very high standard.  The registration ZK-WZY is stencilled on the rear fuselage under the tailplane.  It was supposed to have been exported to Australia but I understand that it is still at Ardmore.  The above photo with period DC3 and control tower, was taken at Ardmore on 3/12/15.


You can see more details on ZK-WZY HERE 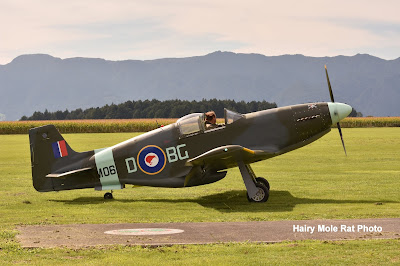 Mike Crene has built several Titan Mustangs at his Kiwi Mustangs facility at Matamata, and he built and owned the original Suzuki engined ZK-DBG2 that I have detailed in an earlier post.  Mike's latest creation is another Mustang for himself, this time a high backed T 51B model with a Honda V6, that he registered ZK-DBG3 (c/n 0138) on 1/4/16.  It wears the kiwi roundel of Mike's first Titan Mustang and carries the serial KM06.  The above photo was taken at Matamata on 10/4/17.  Mike tells me that his new Mustang goes really well.  It certainly looks the part! 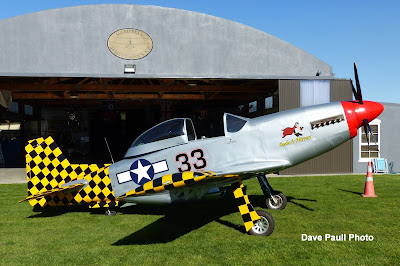 And the most recent Titan Mustang to be registered is ZK-MLE (c/n 0166) that was registered on 28/11/16 to Ivan Campbell of Rangiora.  It also has the Honda V6 engine and an 84 inch prop.  As in the above photo it is named "Smoke and Mirrors" on the starboard side 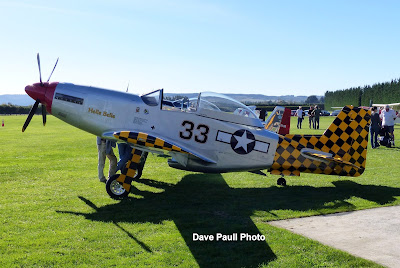 and "Hell's Belle" on the port side.  The aircraft is painted in the colours of the 325th Fighter Group, USAAF circa January 1945.  The above photos were taken at a gathering of six Titan Mustangs (and four Spitfire Mk 26Bs) at Ivan Campbell's Loburn Abbey base, on 22/4/17.  I understand that the aircraft is about to commence test flying.

We will undoubtably see more Titan Mustangs registered in New Zealand, with a Rotax 914 powered example getting close to flying at North Shore, and Ivan Campbell building another one.

And we will also see more powerful engines fitted, as I am aware of a couple of 6 litre 400 HP small block V8 Chevrolet engines in the country for fitting to Titan Mustangs.