As seems to happen with aircraft (and probably more so because the Titan Mustang is a scale model fighter), there is a tendency to install more powerful engines.  And so the various builders started installing Suzuki V6 engines.  These engines have ranged between 2.5 and 2.7 litres and produce around 150 to 170 HP.  Of course, as with everything aircraft, there is a compromise and more power means more weight and so the cruise speed does not go up much over the 100 HP Rotax Mustangs, but the climb performance is improved and it is a genuine 2 seater.  But probably more importantly for a scale model fighter, they sound more the part and they can swing much bigger propellers up to 84 inch diameter, which look much more to scale.  These more powerful aircraft are registered as Amateur Built Aircraft and have a heavier MAUW.

We have had seven Suzuki powered Titan Mustangs to date as follows: 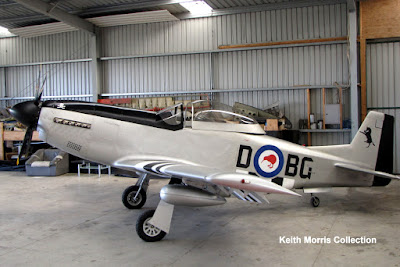 The first one was Mike Crene's lovely looking Kiwi Mustang ZK-DBG2 (c/n 044) which was first registered to him on 12/7/07.  It had a V6 Suzuki Vitara engine that produced around 170 HP and it was eventually fitted with an 84 inch Titan prop driven through an Autoflight reduction unit.  It really looked the part and in a reversal of the usual aircraft flow it was sold back to the USA.  The above photo was taken at the 2010 SAANZ flyin at Tauranga, on 5/2/10.  It was cancelled from the New Zealand register on 19/2/10 and appeared on the US register on 26/2/10 as N396LC registered to Joseph R Cram of Seattle, WA.  He owned it for a little over a year and on 16/3/11 it was cancelled from the US register and exported to Thailand where it was registered HS-MTG on 4/4/11 to Kraivuth Srinkapaibulaya with whom I believe it is still current.  You can see a photo of it as HS-MTG HERE 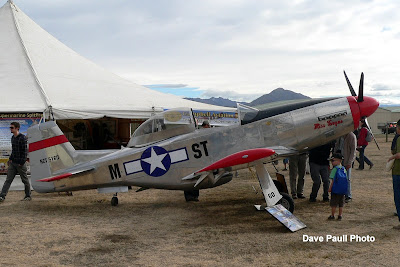 New Zealand Titan Aircraft agent Ivan Campbell's first Suzuki engined Mustang was ZK-MST (c/nM05XXXSOHK0060) which had a 2.5 litre Suzuki, heavier gear legs and an 82 inch prop.  It was named "Miss Torque" after the full size P 51D ZK-PLI that was operated by the Alpine Deer Group (Tim Wallis) from 1994 to 2004 and was painted in similar colours, but with the serial NZT5160 on the tail.  It is photo'd above on 2/4/10 at Omaka.  Unfortunately it suffered a drive failure on 23/8/10 near Oxford and was badly damaged in the ensuing forced landing.  It was cancelled on 22/9/10. 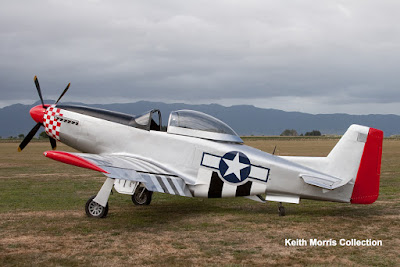 Peter V Walton of Manakau finished building his Titan Mustang ZK-WSV (c/n 95) at Mike Crene's Kiwi Mustangs facility at Matamata and first registered it on 19/2/09. It swung an 84 inch Titan propeller and featured the stronger gear legs and also had inner gear doors fitted.  The above photo was taken at Matamata by Mike Crene on 5/2/10. 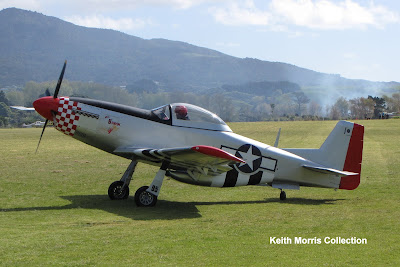 Later Pete Walton moved to Whitianga from where he is active flying his Mustang.  It now has the name "Miss B'Havin" and has 95 on the gear covers.  It is photo'd above at the 2014 Black Sands flyin at Raglan, on 8/11/14. 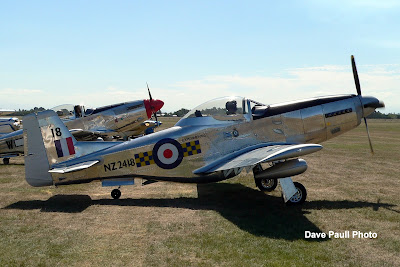 Campbell Aviation Ltd built ZK-TLI (c/n 0049) for former RNZAF Air Commodore and Director General of Defence Medical Services Leonard J Thompson of Kerikeri and it was first registered on 26/11/09.  Len flew Mustangs in the 1950s for the No 4 (Otago) TAF Squadron of the RNZAF and ZK-TLI is marked as NZ2418 which was the aircraft that he flew in those days.  The blue and yellow checkers are the markings of the No 4 (otago) TAF squadron.  It is photo'd above at the 2011 SAANZ flyin at ashburton, on 6/2/11.  After being based at Kerikeri for some time, it was sold abroad to Australia as VH-MJS where it was registered to Sean J McBain of Castle Hill, NSW.  It was cancelled from the New Zealand register on 20/9/16 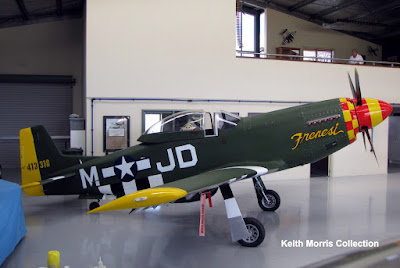 In Tauranga Mike Dean and Marty Cantlon built a pair of Titan Mustangs (Marty's one has a 3.5 litre Honda engine of which more about in a later post).  ZK-MJD2 (c/n M05XXX50HK0078) was registered to M J (Mike) Dean on 23/11/10 and represents the aircraft of Lt Col Tommy Hayes of the 357th Fighter Group USAAF who named his Mustang "Frenesi" (Free and Easy). You can see more details of the aircraft below - click to enlarge.  The above photo was taken inside Mike's and Marty's immaculate hangar at Tauranga, on 27/1/12. 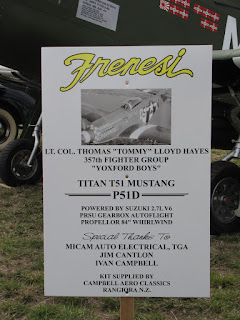 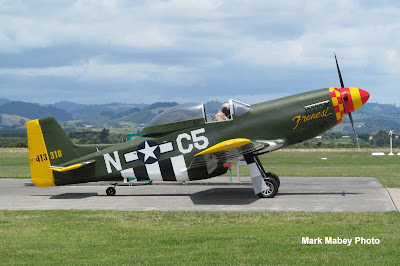 Sometime later it was repainted with the code N-C5 which is more historically accurate, as in the above photo taken on 28/12/14. 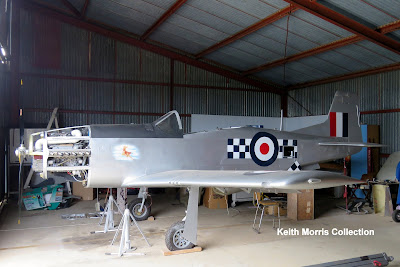 ZK-FDL2 (c/n 83) was constructed in Auckland by Warren Sly but then transported to Whitianga when Warren moved there.  The above photo was taken at Whitianga on 14/3/16 where it can be seen that wears the colours of the No 1 (Auckland) TAF Squadron of the RNZAF.  Warren told me that it is complete but that it has not yet flown.  Warren has also manufactured various accessories for the T 51 including inner gear doors, bomb racks and gun ports. 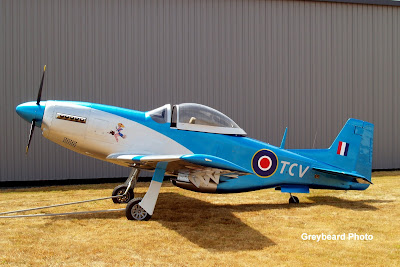 And finally for now, our latest Suzuki powered Titan Mustang was completed by Alan M Caudwell in Nelson and registered to him as ZK-TCV (c/n 0081) on 21/7/15.  It is photo'd above at Nelson on 18/12/17.  Thanks for the photo Greybeard.