The next type of sport aircraft to be registered here was the Titan Mustang which is a 2 seater and has proved to be very popular with 20 of the aircraft registered in New Zealand to date.

The original Titan Mustang was designed to use a Rotax 912 or 914 engine and it performed well with this power.  In fact the 75% scale Mustang had been a dream of John Williams of the Titan Aircraft Company of South Austinberg, Ohio since the early 1990s but a suitable engine was not available until the arrival of the Rotax 912 in 2002 which could fit into the scaled nose.  However the propeller was smaller than scale and some thought that this detracted from the look of the aircraft.  I understand that propeller "extenders" are available for fitting on the ground for a better look.

The fuselage is constructed from a chromoloy steel frame with aluminium skins and the aircraft is designed to allow +6G and -4G.  It is supplied as a kit with many of the assemblies pre-built including the centre section, spar and forward wing, flaps and ailerons and the pre-welded fuselage frame.

Our first few Titan Mustangs had the Rotax engine and I detail all of our Rotax engined aircraft below.  We have had eight to date and they are all still current. 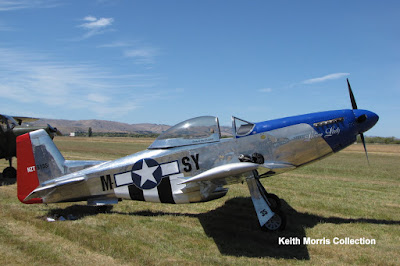 Ivan Campbell of Campbell Aero Classics is the Australasian agent for the Titan Mustang and he built the first Titan Mustang to be registered:  ZK-MSY (c/n 0035) which he first registered to the Campbell Aviation Company Ltd on 2/3/06.  It is powered by a Rotax 912 ULS engine.  It carries the name "Loburn Lady" on the nose (reflecting the Campbell's base at Loburn Abbey and features the code NZT5135 on the tail which reflects the constructors number.  The above photo was taken at the 2009 Wings Over Wairarapa airshow, on 17/1/09. 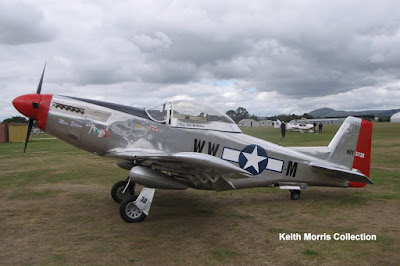 Bill W McWilliam of Masterton built the second Titan Mustang to be registered, using his initials for the registration; ZK-WWM.  It was registered on 6/10/06 and has the c/n M004XXX50HK0038 (I guess this is the full version of the c/n and that many other Titan Mustangs just use the last 4 numbers for their c/n).  It is powered by a turbocharged Rotax 914 engine.  It carries the serial NZT5138 on the tail.  The above photo was taken at the RAANZ flyin at Masterton on 12/3/11 where it can be seen that the aircraft is fitted with drop tanks that I understand reduce the speed considerably. 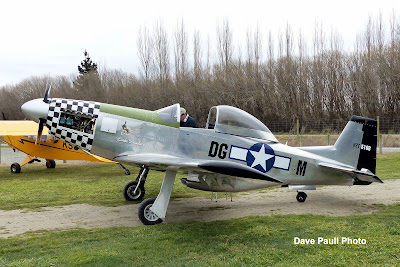 Next up was ZK-DGM2 (c/n M05XXXSOHK0068) which was built by Kerry Millar of Christchurch and was registered to Kerry E and Linda Millar of Christchurch on 11/7/07.  It carries the name "linda Lovelace" on the name and the serial NZT5168 on the tail.  The photo was taken at its home base at Rangiora on 22/8/14, where the Rotax cylinder heads can be seen inside the engine bay.. 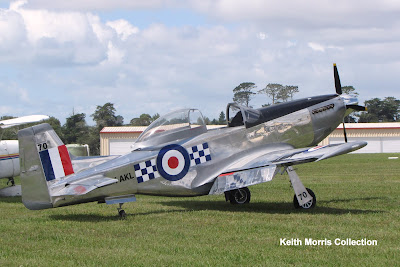 ZK-AKL2 (c/n 0070) was built by a group from NZ Warbirds and was registered to Titan 51 Mustang Ltd of Manakau on 2/4/08.  I understand that a lot of work was put into the finish of this aircraft including all the rivets being solid flush rivets.  It is painted in the colours of the No 1 (Auckland) TAF Squadron of the RNZAF and carries the number 70 on the tail reflecting its c/n. 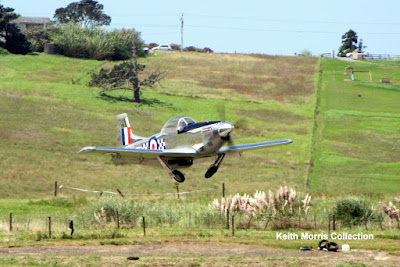 It is photo'd here at an airshow at North Shore airfield on 26/2/11, the only time I have ever seen it fly, and it seems to have disappeared since. 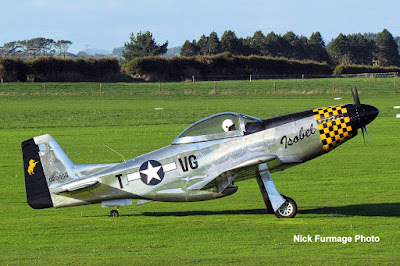 ZK-TVG (c/n 0058) was built at Tauranga by Vaughan Peters and Geoff Pascoe and was first registered to the TVG Syndicate of Tauranga on 18/7/08.  It made its first flight in September 2008, powered by a Rotax 912 ULS engine.  It is named "Isobel" and its colour scheme is inspired by the Mustang "Double Trouble 2".  It carries the serial 080058 on its tail.  On 20/2/15 ownership transferred to Gary D Marsh of Inglewood and the aircraft is very active from its base at Stratford, where the above photo was taken on 15/5/15. 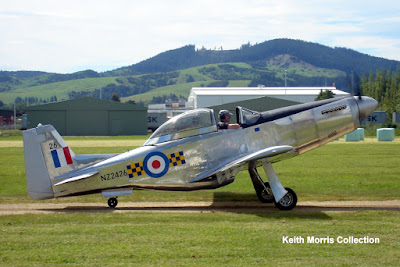 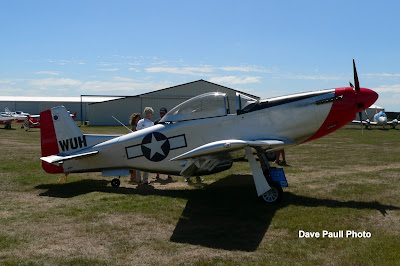 That is seven of the eight Rotax powered Titan Mustangs.  The eighth one is ZK-LSD (c/n 172) that is another one from Kiwi Mustangs.  It was registered on 26/5/16 to Mike Adams of Stratford and later Wanganui.  It is painted as USAF Mustang 412943 from the Korean war with Tigers Teeth and a yellow spinner.  This Mustang survived the war and after a many years in Uruguay, in 1985 it was shipped back to the USA and restored as N151JT being completed in 2013 when it was judged the EAA AirVenture Post WW 2 grand champion.  Below is a photo of what ZK-LSD may look like - I understand that it will be revealed in the next few weeks. 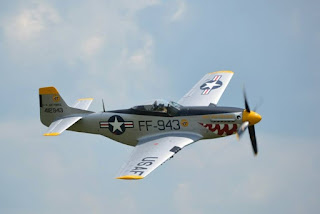