Percival Provost T Mk1 ZK-JOT ( marked as WV666) is being worked on at North Shore to bring it back to airworthiness and engine runs have been carried out.  It was first registered here on 17/4/03 and is owned by the Subritsky and House Partnership of Albany, Auckland. 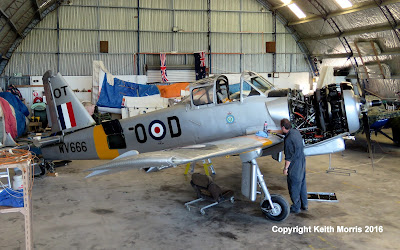 Steve Subritsky is shown here working on his aircraft today and he is being assisted by Bruce Ricketts.  The aim is to have the aircraft at the RNZAF 80th anniversary air pageant at Ohakea next February, alongside the Strikemasters so that their lineage can be seen.