Filling in; & Shipping out. 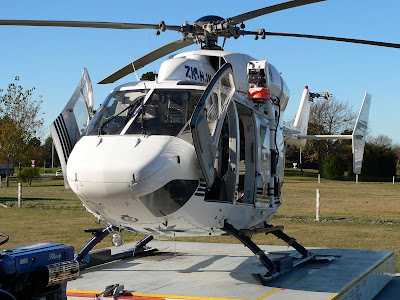 Kawasaki BK117 A-4 ZK-HJK , c/n 1020 , at the Garden City Christchurch heliport, filling in for the Westpac Trust BK117 ZK-HJC which is down for routine servicing. 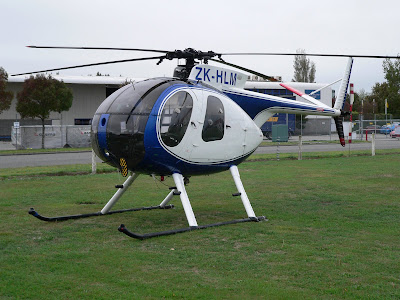 On the western side of the airport was the Hughes 369HS ZK-HLM being packed into a container for shipment to Australia by Heli Maintenaince.
This helicopter is now 32 years old (nearly as old as me) and reduces the number of registered 500C's in NZ to around 25.
Its c/n of 63-0488S tells us that it was constructed in June (the 6th month ) of 1973 (the 3 being the year) and is the 488th "S" model built.
It was originally a James Aviation import and arrived in August 1980. Its most recent operator was Aviation West out of Double Hills Station in the Upper Rakaia.
It has been replaced at Double Hills by the Hughes 369D ZK-HYY ex Garden of Eden Helicopters - which is now minus all its Star Wars art work. (see pics in Blogs of late February).
Garden of Eden will be receiving a new NOTAR in about a months time - So we can expect the above HYY to become something else so that Barry can retain his HYY letters; and we can look forward to another interesting paint scheme.
The above pic taken on 05-04-08 at Garden City H/C.