In my last post of 2017 I finished by asking the question:  "Does anyone know anything about the Zephyr Airworks Mule SPA ZK-UZA, that is ex N302ZX and was registered to Zephyr Airworks LLC of Wellington in October 2017?"

I had no takers at the time, but all has been revealed today.  I get a feed from Interesting Engineering and there it was! 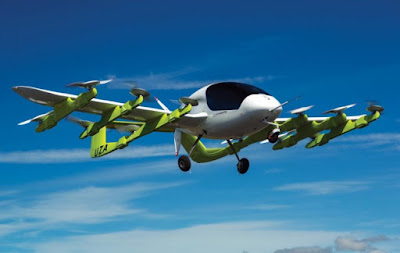 ZK-UZA turns out to be an Autonomous Electric Aircraft that is named Cora and that has been developed by a US company Kitty Hawk, which is backed by the co-founder of Google Larry Page and is in partnership with the New Zealand Government!  The publicity says that the aircraft has been having test flights in New Zealand and there is a video which may or may not have been taken from the aircraft showing flying around the Port Hills and Lyttleton Harbour.

It looks very impressive with its 12 independent electrically driven rotors.  It is capable of carrying 2 people over a range of 100 kilometres at speeds of over 150 kilometres per hour driven by a pusher electric motor, and it can take off and land vertically.