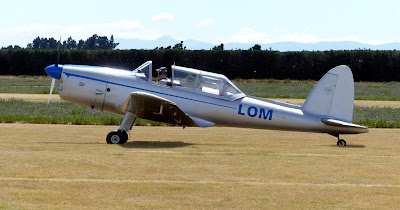 This is what the NZ Aviation News Magazine said a bout it when it was first registered to the Lon Syndicate of Christchurch on 11-03-2008.


'Built as a model T10 for the Royal Air Force, given the serial WB745 and delivered on to 14 RFS at Hamble. It was used by them and also the Southampton University Air Squadron before moving to 9 MU (Maintenance Unit) at Cosford in September of 1954.
In April 1956 it was sold to BOAC and civil conversion to Mk 22A standard took place at Croydon before it joined the civil register briefly as G-AOJS on with Airways Aero Associ
On it was again cancelled on sale to the in , initially registered as VR-NBI but then changed to 5N-AAE in 1961 with the Nigerian change of aircraft nationality markings.
Its history now becomes a little clouded but it seems to have spent some years stored in before being acquired and re-imported into the by Ron Cooper in about June of 1989. It was restored to its old G-AOJS markings on 02-07-1990 but it did not receive a UK C of A due to “paperwork issues” and was duly cancelled on 06-09-1996 as sold to Bravo Resources of Perth, West Australia.
Rebuild was commenced but “paperwork” again seems to have got in the way. Work started on its restoration here in NZ one year ago () in the hands of LOM Syndicate. A case has been presented to the Australian CASA to resolve the paper work issues, which has been accepted and also been looked at favourably by the NZCAA. Why ZK-LOM you ask :- simple: It is going to have a Walter LOM M332 supercharged engine with constant speed propeller installed giving about the same power as the DH Gipsy Major.
Posted by Dave Paull at 21:12