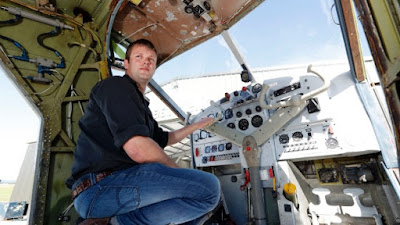 MARTIN DE RUYTER
Mark Stagg with the de Havilland Beaver aircraft he is restoring at his business, Argus Helicopters at Motueka Airport.
A classic aircraft with a "very distinctive sound" is being brought back to life to boost tourism in the region.
Argus Helicopters director Mark Stagg is overseeing the "rebirthing" of a 60-year-old De Havilland Beaver aircraft at the company's hangar at Motueka. He is being assisted by several Nelson-based companies.
Stagg sourced and hand-picked the aircraft from Sydney, and organised its importation to New Zealand on behalf of the client, Sam and Wayne Brown of Air Charter Karamea. 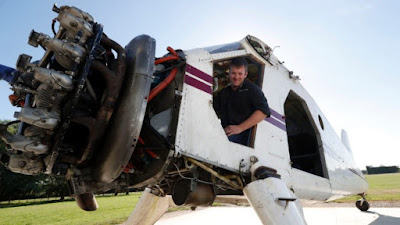 MARTIN DE RUYTER
Mark Stagg at the controls of the de Havilland Beaver aircraft being restored to transport tourists in the Nelson region.
After the extensive upgrade and refurbishment is completed over the winter months, the plane will spend its new life – among other tasks – flying passengers in and around the Kahurangi and Abel Tasman National Parks.
Included in the long list of work planned is a rebuild of the engine and propeller, a full repaint and a rework of the interior, an extension of the cabin and the updating of radio equipment.
Built in Canada in 1955, the aircraft went to Australia in 1988.
"It's been on skis, its been on floats, it's done everything," Stagg said.
Air Charter Karamea is based at Nelson Airport, focusing on walker and mountain-biker transport to Kahurangi National Park.
The Beaver was a popular plane in the 50s and 60s in New Zealand carrying out tourist and agricultural top dressing work.
Stagg said while his staff were used to working on helicopter projects, working on the classic aircraft was something they looked forward to.
"It was just like a classic car project really, you look underneath the visual stuff to the bones of it and then bring it back to life," Stagg said.
The Beaver would also make appearances at airshows such as Warbirds over Wanaka.
"There are a lot of people who have a special place for the old Beaver, a lot of enthusiasts for whom there's nothing like the sights and sounds of seeing one," he said.
"It does make a very distinctive sound and having one operation commercially around here is going to be a real asset."
Local businesses will play a big hand in the refurbishment, with Creative Colours leading the paintwork, Generation Global doing the interior, and the electronic systems work being carried out by Nelson Avionics.


By the time the aircraft is finished at the end of this year, Stagg said the aircraft would be valued at over $750,000.

With thanks to Andy Heap and Lord Nelson for forwarding this item from the NELSON MAIL.
Posted by Dave Paull at 05:21