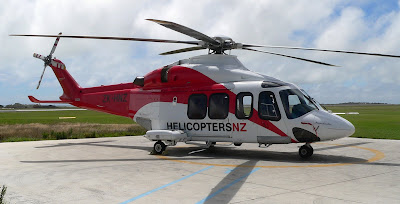 The following snip comes from the NZ Herald.


9:15 AM Wednesday Apr 13, 2011
Canadian Helicopters Group, Canada's biggest chopper services company, will buy Allan Hubbard's Helicopters (NZ) Ltd. for $160m, beating the value put on the unit when it was tipped into lender South Canterbury Finance Ltd.
The Canadian company last month flagged expansion plans, and will pay for the deal through its C$43 million cash on hand and bank financing. That's the first major asset sale by receiver McGrathNicol, and beats the $162.5 million valuation of both Helicopters and Scales Corp. when Hubbard switched their ownership to SCF in March last year as the lender struggled with unmanageable debt.
"Acquiring HNZ will assist in providing greater stability as it extends the arm of CHL's existing operations in Canada, the United States and Afghanistan," chief executive Don Wall said in a statement to the Toronto Stock Exchange.
"The acquisition of HNZ represents a transformational investment for CHL and in a part of the world that complements CHL's activities in the northern hemisphere."
The deal is the first since SCF was tipped into receivership after it failed to attract a suitable bidder last year, prompting a $1.7 billion call on the government's deposit guarantee.
The net cost of that call has ballooned from the initial $400 million to $500 million flagged by Prime Minister John Key, with The Treasury last week flagging a $1.2 billion hit from the collapse of financiers including SCF, Allied Nationwide Finance Ltd., and Equitable Mortgages Ltd.
Receiver Kerryn Downey said the sale was the culmination of a "significant amount of work" and he was pleased with "what we believe is a good price for the business."
SCF's investments, which include Helicopters NZ, were valued at $235.8 million in the receiver's first report.
Canadian Helicopters will lift its fleet by a third to 160 choppers, and add an annual C$62.2 million of revenue to its books, based on the local company's 2010 performance. The Canadian company's shares rose 0.9 per cent to C$19 in trading on the TSX.
The deal is subject to Overseas Investment Office and Civil Aviation Authority approvals. The OIO has yet to receive an application.
Posted by Dave Paull at 15:32