The North Shore Airfield Open Day last Saturday boasted a nice feature where the large North Shore Aero Club hangar had many aircraft on display that could be walked around and looked inside of, without being behind barriers. 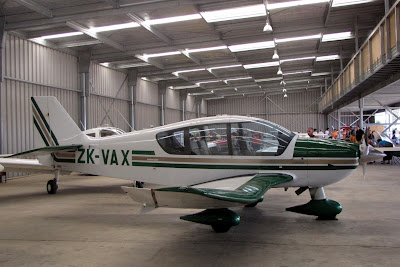 One of the aircraft on display was the locally based Robin DR 500 President ZK-VAX which has been owned by J H Smith of North Shore since it was first registered in New Zealand on 11/8/05. It was previously G-LISE and first registered in New Zealand as ZK-LIS for about 3 months, but I it ever flew as such. The DR 400/500 series is the latest decendent of the Jodel series of aircraft, and features the Jodel bent wing. The DR 500 first appeared in 1997 with a 200 HP Continental IO 360 motor and constant speed propellor. It has a larger cabin than the DR 400. 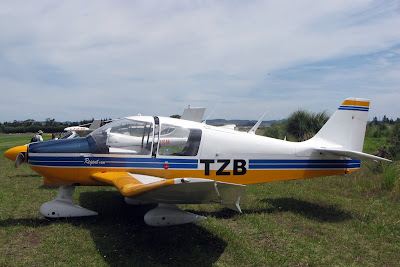 This got me thinking as I had photo'd the DR 400/180 Regent ZK-TZB at Parakai the previous weekend (it was also at North Shore on Saturday). ZK-TZB is ex F-ODAN and it was first registered to Izard Pacific on 20/1/04. After a brief spell with I B Communication Ltd in Palmerston North it was sold back to Izard Pacific and the on to its current owners D & C Fletcher of Wellsford on 5/12/07. 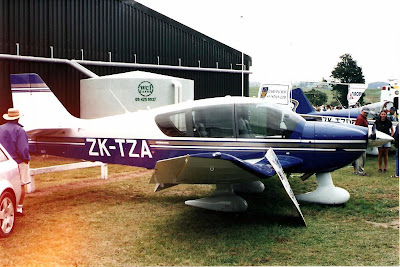 And to round out the total of DR 400's in New Zealand, here is a rather poor photo of DR 500 President ZK-TZA taken at an airshow at Warkworth in late 2001 (Can anyone supply a better photo?). ZK-TZA was first registered in New Zealand to Izard Pacific on 30/1/01 and it has been owned by C H Johnstone of Te Kowhai since 26/8/04, where it lives in a hangar off to the side of Te Kowhai airfield.
The DR 400 series of aircraft was first introduced in 1972 and more than 1700 have been produced.