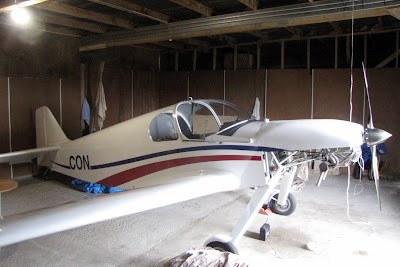 While poking around the hangars that were open at the RAANZ flyin at Masterton, I came across this interesting microlight which was a neat surprise. It is the Bennett Condor ZK-CON which was built in Wanganui by Bill Bennett, and first registered on 15/12/09. It started out as a Minicab but Bill added a 500 mm fuselage extension, then he enlarged the cabin a bit. Then he added a Vans style undercarriage and a cut down Alpi 200 canopy. It is powered by a UL Power 260i motor of 100 HP and it flies very well according to Bill. It is now based in Masterton and is flown by Bill's son Mike Bennett.