Rusty Russell of the Whangarei Flying Club has recently posted on Facebook about a gyrocopter that is a long way from its home base: 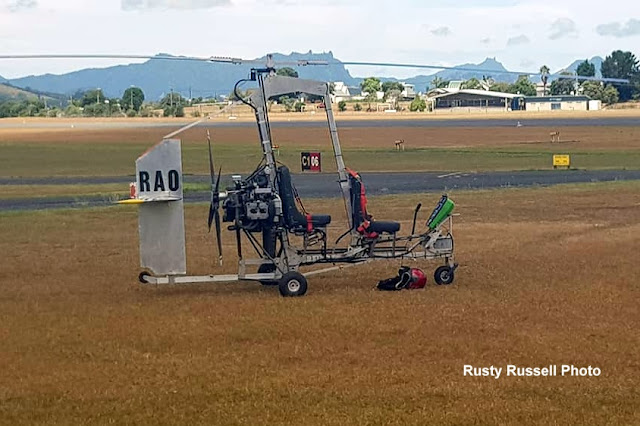 The Parsons Trainer gyrocopter ZK-RAO3 (c/n 685) has an interesting history as a type. It was designed in the 1970s in the US by "guru of gyros" Bill Parsons who was concerned at the number of accidents that new gyro pilots were having in single seat Bensen Gyrocopters that were common at the time.  Bill Parsons designed has tandem trainer to give safer training and over the years he built or provided kits for hundreds of his gyrocopters, and with his gyro CFI helped to train over 600 gyro pilots.  Sadly all this good work came to an end in March 1997 when he was killed in a gyrocopter accident at Flagler County Airport in Florida.

Our own example ZK-RAO3 was presumably built from a Bill Parsons kit and was first registered here in October 2002.  I don't know anything about its history except that it had an accident at Clyde in April 2008.  It has been owned by B Mander (Wolfie) of Twizel since 22/2/17.  He had not gone solo it it until he trailered in North to Whangarei where he did some training with Rusty Russell and he has now gone solo and flown cross country flights.  He has since trailered the gyro back to Twizel.

ZK-RAO3 has acquired a Dominator style rudder sometime in its life and is powered by a 200 HP Subaru engine.  Interesting.