The Beechcraft King Air 350i N881HG (c/n FL1155) arrived in Nelson on 2 July 2019 on delivery to Tasman Aviation Ltd following a ferry flight from Jakarta/Halim where it had been operating for several month.
It passed through Darwin on 30 June then via Gold Coast on the 1st July and through Auckland on the 2nd.
Photo below was taken at Nelson by T Hodges on 02-07-2019.

Below is what NZ Aviation News Magazine said about it :-
Tasman Aviation Ltd has operated the Hawker Beechcraft B200GT Super King Air ZK-VMF out of Nelson since August of 2014. They have now taken delivery of a Beechcraft B300 (B350i) which arrived at Nelson as N881HG on 2 July 2019.
This was first listed with Textron Aviation Inc before delivery to Montello Global Ltd in October last year and has been noted as flying out of Jakarta for several months before being acquired by Talleys Group Ltd on 27 June 2019. It was transferred to Range Flyers Inc on the 28th for its deliver to NZ via Darwin and Gold Coast and then into Auckland and Nelson on the 2nd of July. It became ZK-VME on the 10th, but as of mid-August had not yet flown on its NZ CofA.

The photo below from Cody Forward shows ZK-VME at Nelson on 21 August with a modified colour scheme. The red flash lines now appear to be black and the 'B' (for Beechcraft) and the model  '350i' graphics have gone from the fin. 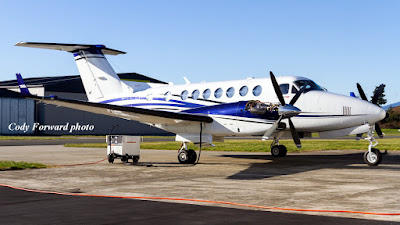