Thanks to Hairy Mole Rat we have three pics of the NuWaco T-10 ZK-WTW (c/n 21) doing its first engine runs and taxiing at Tauranga today. 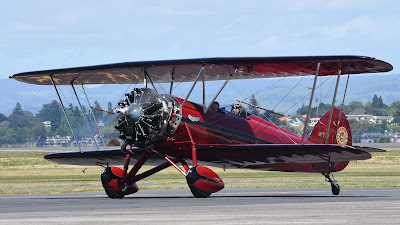 Above it is in "Two Hole" mode.
In the two shots below it is a "Single Hole". 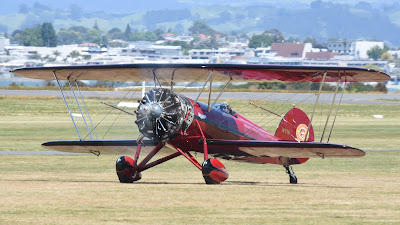 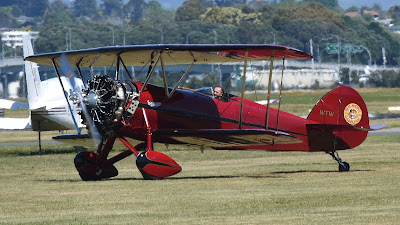 Below is what the NZ Aviation News Magazine said about it after its NZ registration on 03-07-2015 to Marty Cantlon of Tauranga.
The NuWaco T-10 is a comprehensive kit (not a replica) aircraft based on the Waco model 10 Taperwing with this example being registered as ZK-WTW ( Waco Taper Wing) for Marty Cantlon. This aircraft first appeared on the US register as N275TW in August 1982 for David Allen of Monument, Colorado, moving on to Robert Michael of Honualoa Hawaii from 21-08-1998.
By 19-09-2005 it was back on the mainland USA with John Hartman at Fort Collins, Colorado and finally to Steve Miller at Naperville, Illinois from 20-07-2009.
It was noted at Tauranga in March.
Posted by Dave Paull at 21:00