Fokker F27 Friendship Mk 500 ZK-NAO (c/n 10364) of Airwork Flight Operations is normally a nocturnal aviator. However Bargeld01 captured it sneaking around during daylight hours at Wellington on Thursday the 6th. 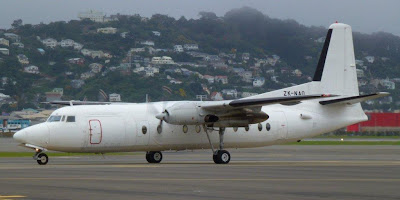 Originally an Air New Zealand Friendship from about late 1978 (forgive the guesswork as I am based at Tekapo at the moment without my reference material) before moving to Airpost in late March of 1992 and then to Airwork in December of 1993.
Posted by Dave Paull at 08:30