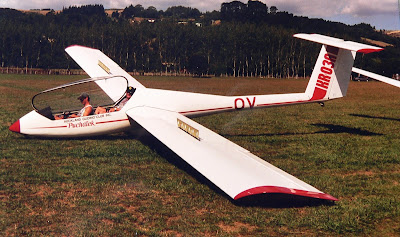 ZK-GOD however is a completely different animal. Referred to as a "Clockwork Mouse" this Slingsby T61C Falke arrived from Slingsby's in a damaged condition mid 1973. It is a motor glider (which to my eye, lacks in radiant beauty) powered by a Pieper Stork-Stamo 1500 engine (Is that another word for VW ?). C of A status was gained on 18-07-1973 and it was registered in the powered aircraft section of the register as ZK-DOI. Pic shows it as such at Drury on28-08-1985. It went to the Auckland branch of the Air Cadet League of NZ (Inc) and was reregistered in the glider section of the NZ civil register as ZK-GOD on 13-03-1993. Ownership title changed to Auckland ATC Gliding School on 27-04-1994 with Paul Schofield appearing on 18-10-07.

Revoked often just means that paperwork is not up to date. So we may see these two back on the listings some time.