The 2019 Wings Over Wairarapa Air Festival was scheduled to run from Friday 22nd February (Practice Day) to Sunday 24th February.  As things turned out only the 22nd and Saturday 23rd were flyable and the Sunday flying was cancelled.  And due to the weather and the possibility of Cyclone Oma heading our way, most of the scheduled airshow aircraft from Auckland and West of the ranges could not attend.

However, given the above and the disappointing no-show of the B 52 (for technical reasons), I found the two airshow days to be full of interesting things to see and investigate. 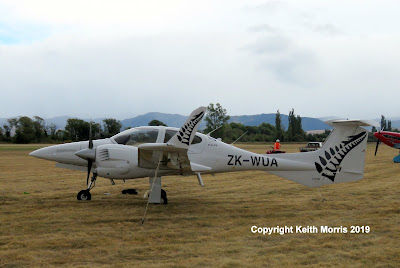 One of the  few visiting GA aircraft was this Diamond DA 42 Twinstar ZK-WUA which has been owned by the New Zealand International Commercial Pilots Academy (NZICPA) of Whanganui since 25/10/18.

Its registration was changed from ZK-ZYX to ZK-WUA on 24/10/18 and I think that this may be the first of several re-registrations of their aircraft as they have also re-registered two of their Cessna 172s as ZK-WUB and ZK-WUC (from ZK-OEM and ZK-CBC2 respectively).