Lockheed 18-56 Lodestar ZK-BJM (c/n 2090) was delivered to BOAC on 06-03-1941 as a model 18-07 and I believe it was based in Cairo and wore the wartime BOAC camouflage scheme. Post WW11 it served in the UK civil scene until moving out to Australia to become VH-FAD in late 1947. It was purchased from Fawcett Aviation of Bankstown by Fieldair Ltd in early 1955 and was converted by Fawcett for its pending aerial top dressing role in NZ. It was ferried across the Tasman by Lionel Van Praag and Titus Oates to become ZK-BJM with Fieldair on 01-04-1955. In its early ag days it carried the name "Whetumarama" (Shining Star). Ownership moved to Airland (NZ) Ltd sometime in 1960. It was withdrawn from use towards the end of 1963 and was broken up at Gisborne, with its registration being cancelled on 15-05-1964.
This photo from an unknown origin, going by the above dates, must have been taken between 1955 and 1960 !

Below we have two even earlier views of ZK-BJM in its original scheme with name on the nose and the Fieldair "strangled Goose" on the fuselage side.
These two pics come from the CMM collection. 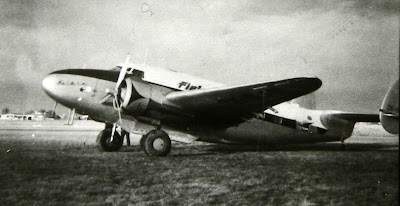