A recent posting of the ex ZK Grumman Mallard on the MRC Aviation Blog, plus the arrival of an aged photograph showing three Grumman's at Invercargill has prompted me to dig out these pics of ZK-CDV taken in the mid 1960's using my trusty Jiffy Kodak B and W camera.

The Grumman G-73 Mallard was the second largest of the Grumman amphibians and first flew on 30-04-1946. Only fifty nine were built, one of which came to NZ in 1963.
ZK-CDV was c/n J13 was imported by  the Utah-Williamson-Burnett Ltd for transportation to its Manapouri Power Station project.
This airframe was constructed in late 1946 and delivered to Canada on 25-01-1947 as CF-FFG. By mid 1951 it was in Indonesia as PK-AKG with an offshoot of Shell Oil. It then moved to the Netherlands New Guinea register as JZ-POB in 1955.

It eventually became VH-TGA in 1962 with East Coast Airlines followed by a transfer to Trans Australia Airlines in mid 1963 and used on the "Coralair Service".
Photograph below of VH-TGA by J Hopton and sent in by Dave Eyre.

It was ferried into Auckland on 13-10-1963 and became ZK-CDV on the 15th for Utah-Williamson-Burnett at Invercargill. It still had some hydraulic problems as its nosewheel collapsed on 07-10-1964 at Invercargill.

Photo above shows three Grummans together at Invercargill in about 1965.
On the left is (I think) the Grumman G159 Gulfstream VH-CRA of Conzinc Rio Tinto who had dealings with the Bluff aluminium smelter. Then an unidentified G-44 Widgeon and then the G-73 Mallard ZK-CDV. Pic supplied by CMM. 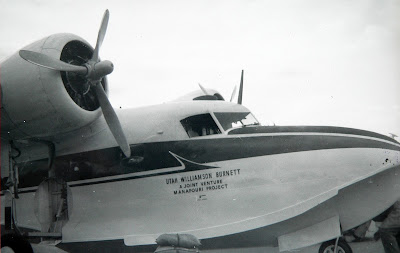 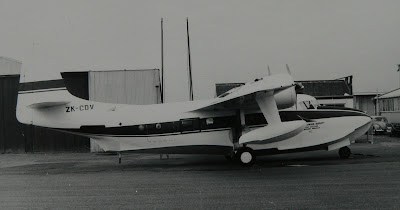 It was purchased in about 1969 by the Department of Internal Affairs and went to NAC in Christchurch for some refurbishment and a paint job before being cancelled on 21-02-1969 and marked up as VQ-FBC. This was for Air Pacific with whom it carried the name "Na Secala". 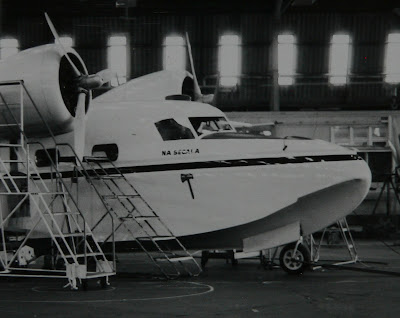 Below is a pic just received from a colleague who acquired it from an unknown photographer. 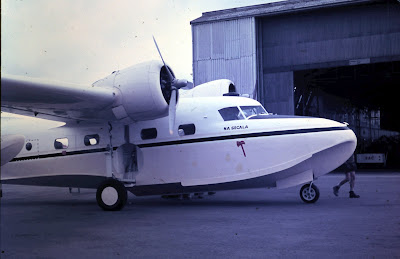 It shows more clearly that the lower fuselage is not white.