A visit to the excellent Queensland Air Museum at Caloundra this week revealed a couple of former NZ aircraft on display.

The first is the Transavia PL12 Airtruk ZK-CWX which was originally imported new to NZ back in September 1968, and then exported back to Australia as VH-HSB in December 1988.  Withdrawn from service in July 2006 the airframe was donated to the Museum who created a hybrid display aircraft using the fuselage and wings of VH-HSB,  and tail booms from another PL12, VH-TTV.

Interestingly they chose to complete it as ZK-CWX  with Barr Bros Ltd titling. 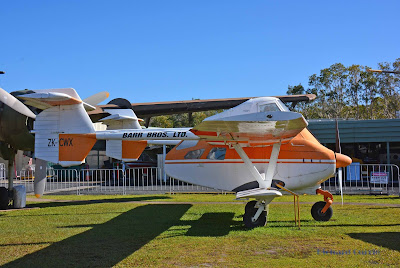 Also with Kiwi connections is the GAF N22B Nomad VH-BFH which spent 2 years with Stewart Island Air Services as ZK-SAL between 1981 and 1983,  before returning to Australia as VH-BFH again.   It was donated to the Museum in September 1990 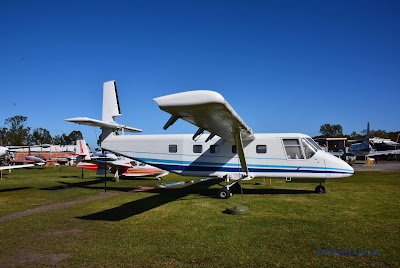 The Museum has an extensive civil and military collection, and is well worth a visit if you are in the area.
Posted by Richard at 17:14