The following email is from Dave Cogan regarding the cancellation of his Cessna 402 ZK-EHS.
Cancelled as withdrawn on 29-01-2008.

"Hi there
A little background on the aircraft.

Auckland Skydivers who were based at Whenuapai operated ZK-EHS as a skydiving aircraft for 10 years until 2001 when they were asked to leave the Base and find a new home. At that point the aircraft was sold to John Fennell’s tandem operation at Taupo.
John on sold to Taupo Tandem of Taupo.
In 2006 Dave Cogan (an experienced skydiver/pilot) purchased ZK-EHS off Taupo Tandem with the view of doing it up.
He had all the avionics upgraded along with state of the art Nav equipment installed. Basically giving it a new lease of life!
With the changes to the Part 43 maintenance rules it was going to require some very expensive SIDs to be complied with, and the discovery of some corrosion put end to Cogan’s dreams.
The aircraft is now located in a hanger at Ardmore being parted out." 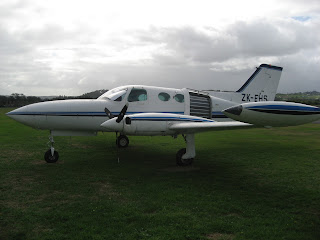 I noted parts listed for sale on TradeMe in November 2007.
Posted by Dave Paull at 20:16