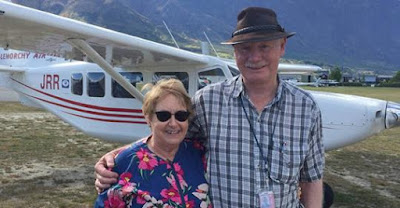 A stalwart of the Queenstown aviation industry has died falling from a ladder.
Glenorchy Air chief pilot and co-owner Robert Rutherford, 71, was maintaining the property at his Frankton home when he fell and died on Monday night.
Rutherford and wife Janet founded Glenorchy Air Services and Tourist Company in 1992, celebrating 25 years in business in 2017.
The company has temporarily suspended commercial operations as a mark of respect for staff, family and friends.
In an interview with Stuff marking the 25th anniversary Rutherford said the aviation business was tough because the costs were huge.


"The returns can be good if things are going well but the risks are high."

Rutherford grew up in Wanaka and was a farmer in Middlemarch. His passion for flight took him to Australia and England, where he worked at a parachute operation.
He returned home in 1986 with wife Janet and three children, with their fourth born in New Zealand, and worked in tourism.

"Then in 1992 we thought we knew enough about what we were doing and we bought an airplane," he said.
They started at a base in Glenorchy but moved to Queenstown when the road linking the two was sealed.
At the end of 2017 they owned four eight-seater GA8 air vans and a four-seater Cessna 172, and employed 10 staff.
Most of their flights were focused on Milford Sound and the Mt Cook area.
Rutherford said highlights over the years included working on the Lord of the Rings films for about 18 months, flying the likes of Sir Ian McKellen and Viggo Mortensen around the region.