Wings Over Wairarapa 2015 - The Old Stick and Rudder Company Display

In the early evening of the Friday practice day at Wings Over Wairarapa 2015, those still present were treated to a terrrific aerobatic display by The Old Stick and Rudder Company's two unique WW 2 warbirds, thh Curtis P 40E Kittyhawk ZK-RMH and the Goodyear FG-1D Corsair ZK-COR.  This unique pair are the only two surviving RNZAF WW 2 fighter aircraft flying in New Zealand today. 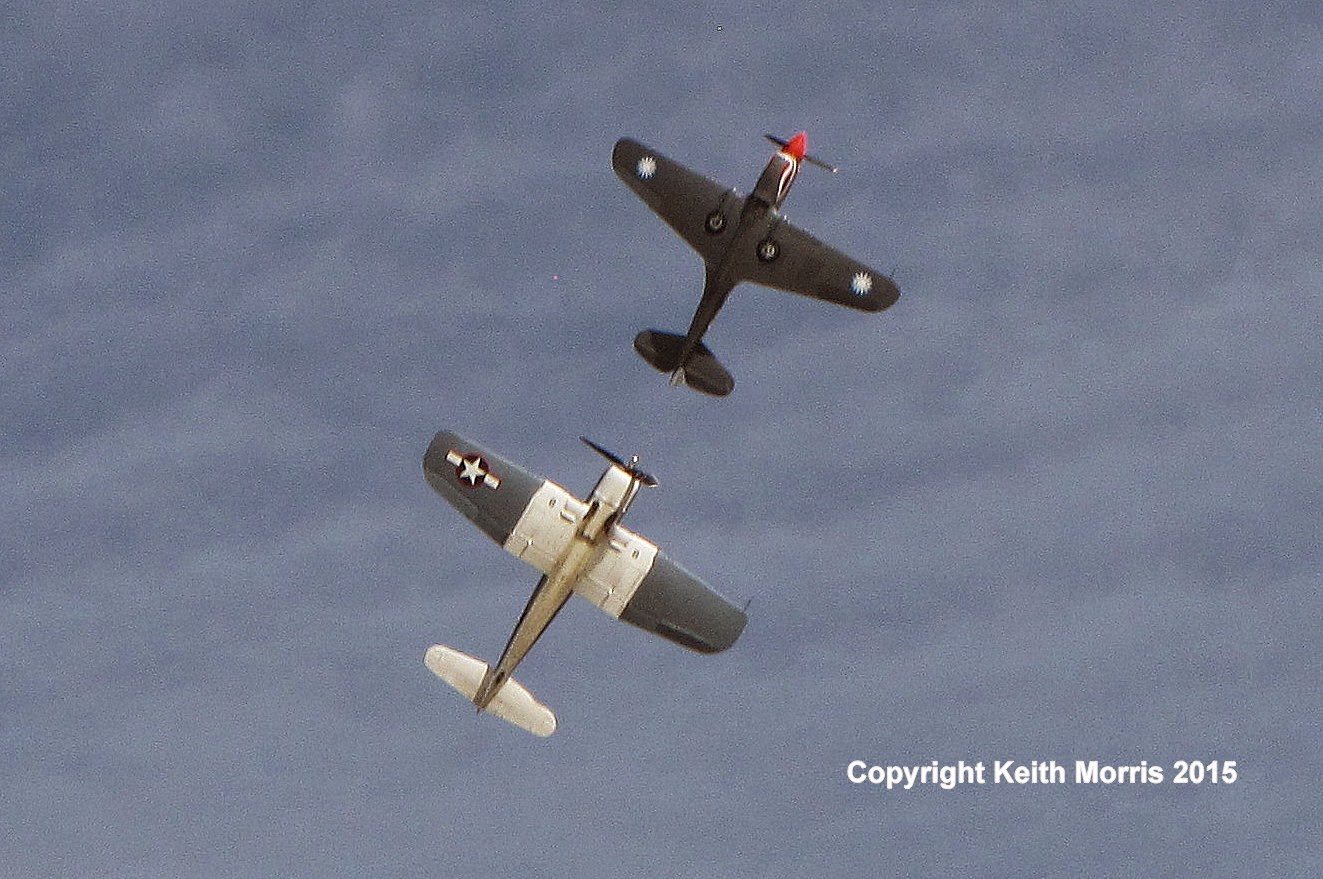 The Kittyhawk was flown by Stu Goldspink (who travelled from the UK for the airshow) and the Corsair was flown by Keith Skilling.  These two very experienced aerobatic display pilots put on an amazing display of aerobatics in close formation, and then each performed a solo routine.  I reckon it was the most spectacular of the practice routines that I saw on the day. 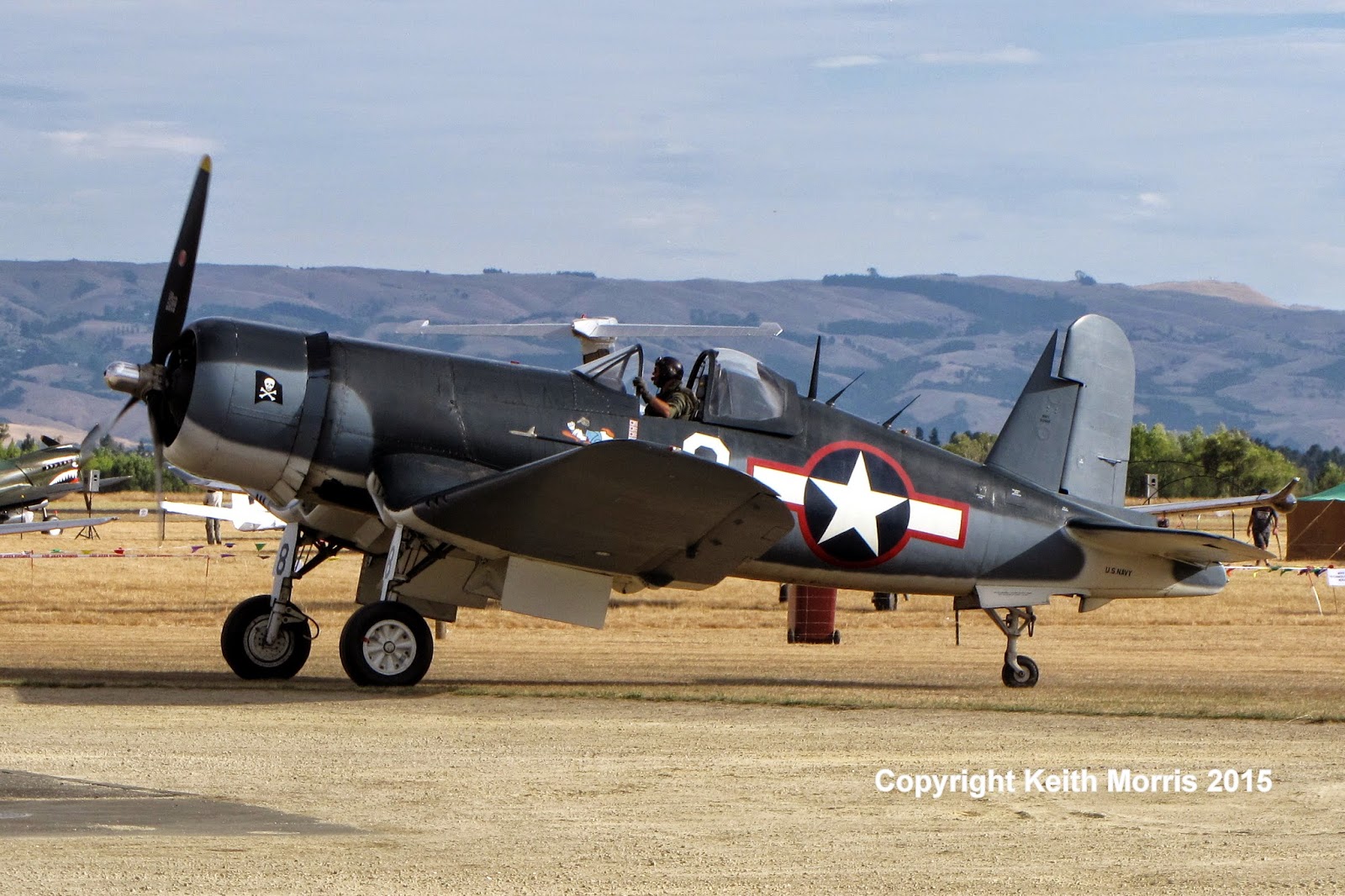 ZK-COR served with the RNZAF as NZ5648 between August 1945 and May of 1949. Then followed a period on display at Hamilton Airport, Asplins Garage at Rukuhia and MOTAT.

It then went to the US as N55JP,  and then to the UK as G-BXUL with The Breitling Fighter Collection.  It returned to NZ for Warbirds over Wanaka in 2004 and has remained here since. It is painted as 92844/8 of VF-17 of the US Navy and wears the number 8 on the fuselage. 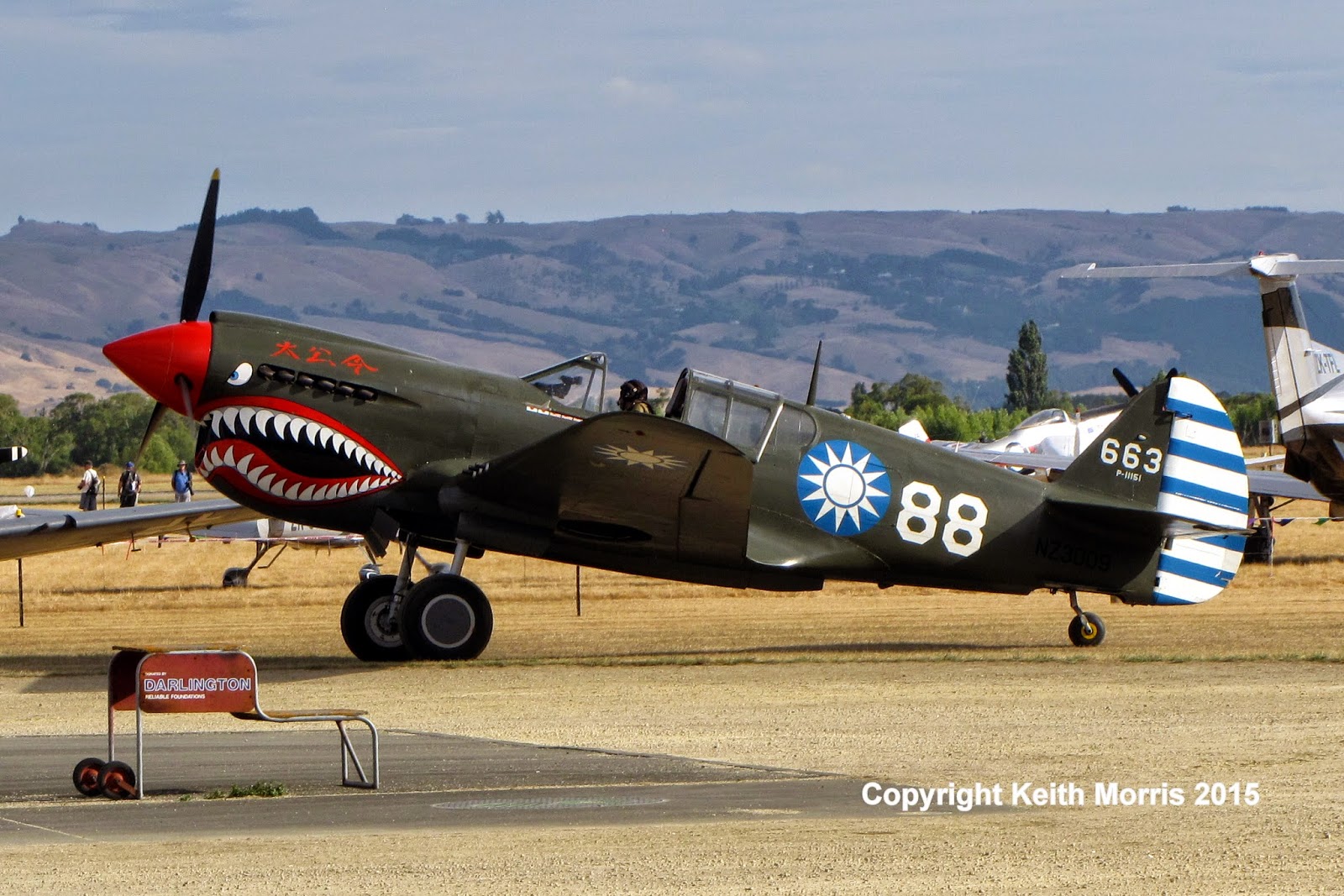 ZK-RMH was originally manufactured as USAAF serial no 41-25158 and was one of the first batch of Kittyhawks to be delivered to New Zealand in April 1942. It was bought on charge on 2 April 1942 as NZ3009 and allocated to Unit 36 at Hobsonville.   It then was allocated to 14 Squadron, then to 17 Squadron then to No 2 OTU at Ohakea.  Amazingly, it was based at Masterton with 14 Squadron around for about a year in 1942, so more than 60 years later it is still there!
After the war it was flown to the Rukuhia storage facility along with more than 100 other Kittyhawks, to be scrapped (out of the more than 300 Kittyhawks operated by the RNZAF).  It was rescued in 1959 by a group of schoolboys led by Charles Darby, who scraped together 25 pounds to buy it. NZ 3009 was chosen partly because it was nearest the gate!  It eventually made its wat to MOTAT where it was displayed in the early 1990's, and then it was rebuilt by Pioneer Aero Restorations for Ray Hannah as ZK-RMH, being completed in 1998.

it then went to the UK as G-CCBE for the Old Flying Machine Company (Ray and Mark Hanna) and it was also part of the Breitling Fighter Collection.  It returned to New Zealand in December 1997 and was re-registered ZK-RMH.  It is painted in the colours of the Chinese Nationalist Air Force representing the aircraft of Xu Hua Jiang, but it also has NZ3009 under the tailplane.

I have done a more detailed post on the history of this aircraft at www.nzcivair.blogspot.co.nz/2013/01/curtis-p-40e-kittyhawk-zk-rmhnz-3009.html

Following their routines, the pair were parked together as befitting of their special status in the history of New Zealand military and civil aviation.