TVALs Albatros D VA reproduction ZK-TGY was registered on 16/2/15 and flew at Masterton during March.  It is painted with the Edelwiess flower and is the fifth D VA to be built by The Vintage Aviator (as well as their D II model).  They all feature 180 HP Mercedes D IIIaü 6 cylinder in-line engines displacing 14.8 litres! 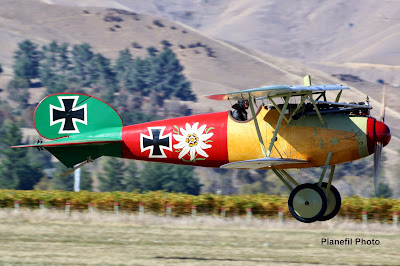 It is photo'd above at the Classic Fighters 2015 Airshow at Omaka flown by Kermit Weeks.  This Albatros has been purchased by German collector Oliver Wulff and will be loaned to the WW1 Aviation Heritage Trust in the UK for display during WW1 centenary celebrations.  It is probably on its way to the UK as its first scheduled public appearance is at the Duxford Flying Legends on 11/12 July.
Posted by Sir Minty at 21:36