Harry Tate May be Emigrating to Australia

The RE8 was nick-named Harry Tate in WW1 after a well known music hall comedian of the time. 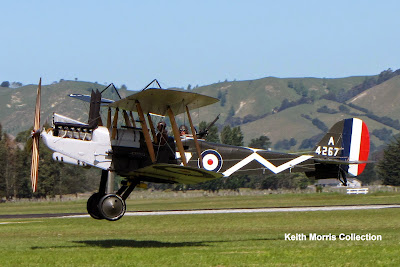 The above photo was taken at the TVAL display at Masterton in November 2012 showing the aircraft marked as A4267 of 52 Suadron Royal Air Force from 1918..

ZK-RES2 is the third RE8 airframe the The Vintage Aviator has built - the first one was a non-flying example that is displayed in The Omaka Avaition Heritage Centre, and the second one was ZK-TVC that went to the RAF Museum at Hendon in London.
Posted by Sir Minty at 21:12