Following my recent postings on Murphy Rebels of New Zealand and smaller and larger developments of the Rebel, it occurred to me that we have one other aircraft in New Zealand that was developed from and looks like a Murphy Rebel. 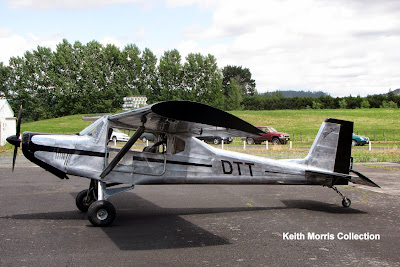 Jersey Seipel built his ULBI WT-01 Klassic ZK-DTT2  "Wild Thing" (c/n 052) in Germany and registered it there as D-MDTT.  Jersey registered it here on 15/10/10 after he immigrated to New Zealand, and it is based at North Shore airfield.

Wild Thing was modelled on the Murphy Rebel however it is much lighter than the Rebel and is registered in New Zealand as a Class 2 microlight with a MAUW of 544 kg. By comparason the Rebel is an Amateur Built aircraft and has a MAUW of 750 Kg. ZK-DTT2  has a 6 cylinder Jabiru 3300 motor and its first flight in New Zealand was at Parakai on 11/11/10.