A trip to Ardmore 29 May proved to be very productive and I was delighted to be on location for the arrival of this beauty, Stampe ZK-BBV.

Thanks to Bluebus for the following blurb dating back to 2011 when the aircraft was first registered in NZ:


We begin the month (July 2011) with a first of type on the register, although it is not the first of its type to fly here. In France on 11-08-1936 a new organisation was formed by the nationalisation of military industries of several well known manufactures. Potez, Amiot, Breguet, A.N.F Les Mureaux and C.A.M.S were united to create the Society Nationale de Construction Aeronautiqeus du Nord – or better known as S.N.C.A.N. We should however cast our minds back even further: to 1922 in fact when Jean Stampe and Maurice Vertongen formed their Company at Antwerp to manufacture training aircraft for the Belgian Government and flying schools under the RSV initials. Jump ahead now to 1933 when the first S.V.4 took flight. This was a two seat trainer biplane powered with a Gipsy Major engine and supplied to the Belgian military. Visually this is often confused with the DH Tiger Moth. About 35 were completed before WW11 halted work. Post war production was also undertaken in Algeria and France – which brings us back to S.N.C.A.N.  It is one of these aircraft that has joined our register as ZK-BBV2 as an S.N.C.A.N. Stampe SV 4A (aerobatic trainer with the Renault 4-P05 engine). Lars Fellman has imported this example from France where it has been flying as F-BBVM since 12-11-1946. Its final French owner was Xavier Maniguet of Dieppe (better known perhaps for his part in the Rainbow Warrior affair) and who was recently killed in an aircraft accident in the Alps. Lars also operates the Rotorway Exec 162F helicopter ZK-IOH and the Zlin Savage (Cub lookalike) ZK-OHA. 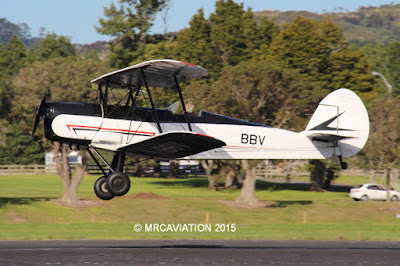