Will It Fly Tomorrow?

TV 3's Story programme tonight featured a clip from a "secret" location where it was reported by TV 3 reporter Lachlan Forsyth that Ivan Mudrovich's Pearse replica ZK-RPT will attempt a flight tomorrow.  I reckon it will be worth a watch tomorrow night on TV 3 at 7 pm.  The location is not at Whenuapai but is at an airfield within a few hours drive from Auckland.

I have previously posted on this interesting aircraft at Wings Over Wairarapa in March 2015 at:   http://nzcivair.blogspot.co.nz/2015/03/pearse-replica-at-wings-over-wairarapa.html

The Mudrovich Perse project has a Facebook page at:  https://www.facebook.com/WILL-It-FLY--250000028348245/ .  This page had been inactive for some time after the aircraft suffered some structural damage to its wing during ground testing at Whenuapai.  However the wing has now been rebuilt. 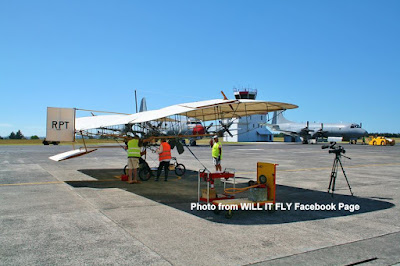 And here is a photo taken during earlier testing at Whenuapai.

I wish them well!