I just happened across TV 1's Seven Sharp programme on TV 1+1 and I was very pleased that I did.  The first item was from Michael Holland (who has done a lot of aircraft stuff) at Avspecs interviewing Texas oil billionaire Rod Lewis who was visiting to see progress on his Carbon Cub floatplane that is undergoing maintenance at Ardmore while his superyacht M5 is undergoing maintenance at Devonport.  I have previously posted on the Carbon Cub at:  http://nzcivair.blogspot.co.nz/2016/03/ardmore-carbon-cub-clarification.html 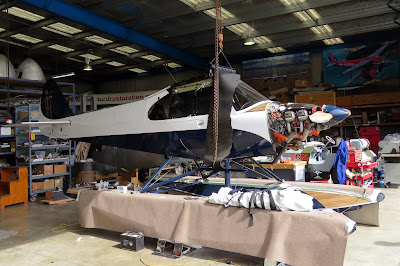 But the really interesting information was from Warren Denholm talking about Avspecs built Mosquitos.  I understood from what Warren said that Rod Lewis may be the owner of the third Mosquito from Avspecs and that his example would be the fourth one flying in the world.  This allows for the first Mosquito Jerry Yagen's FB 26 KA114/ZK-MOS and the Canadian B 35 VR796/CF-HML of Bob Jens.

By this count the second Mosquito from Avspecs will the third one flying in the world according to Warren.  And watch this space! - I understand it may be flying in August this year!

You can see the Seven Sharp item at:  tvnz.co.nz/seven-sharp/small-kiwi-business-benefiting-big-texan-billionaire-video-6457639