I thought that this would be an appropriate post for Anzac Day, and I will post it at the time of dawn services across the country.

Some few years ago, Colin Hay of the Heritage and Sport Aviation Group of North Otago purchased the remains of a 7/8 scale Circa Reproductions Nieuport 11 replica that had originally been registered as ZK-NIE in March 1992.  It was built by John Lowther of Timaru and was painted in the colours of the French WW 1 ace Charles Nungesser.  It did fly at Timaru and was later sold to Neil Lopez of Auckland, on 11/2/97.  It did also fly a couple of times at Pikes Point airfield however its registration was revoked on 2/8/99.  It was next sighted when it was offered for sale at Turners Car Auctions in March 2007 and then it was displayed for a time in the showroom of A1 Rental Cars at Kerikeri.  Finally it was advertised on Trade Me in March 2010. 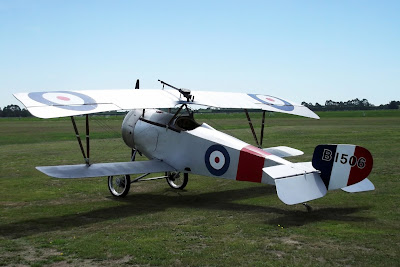 Colin and the volunteers of the Heritage and Sport Aviation Group of North Otago have refurbished the aircraft and have painted it to represent B 1506 of 29 Squadron of the Royal Flying Corps as flown in 1917 by Lt Archibald William Buchanan Miller, DFC.

Archibald Miller was the son of the Rev. Thomas Duncan Miller and Margaret Julia Miller of
Inveraven, Bridgen, Perth, Scotland, Archibald served with the 1st. Battalion, King’s Own
Scottish Borderers before joining the Royal Flying Corps. He was killed in action
on the 13th. July 1917 when his Nieuport 17 was shot down over Belgium by
Hans von Adam of Jasta 6. He was just 21 years of age. His elder brother had
been earlier killed at Gallipoli on April 25th. 1915, also aged 21.
They were the only children of the Rev. and Mrs Miller of Kirkurd, Perthshire.
The following story was told by another minister at the unveiling of the Kirkurd
War Memorial in 1919, and reported in the Peebleshire Advertiser. The annual
picnic for children of the parish was held at the Manse on July 13 and his mother
Margaret, read out a letter from Archibald in which he expressed his hope that
they would have plenty to eat and would enjoy themselves. Among the prizes he
sent for the children were miniature aeroplanes, which should be prized by those
who won them. He jocularly wrote that if he could get off duty he would fly to
Kirkurd and have some fun with the children, and so his father scanned the
clouds and peered as far as he could see, but no plane was visible.
A few hours later, flying within German lines and engaged in aerial combat he
was killed. Archibald William Buchanan Miller is buried at the Harlebeke
New British Cemetery, Harlebeke, West-Vlaanderen, Belgium.
Archibald Miller scored six victories in B1506, all of them against the Albatros DIII.

The rebuilt Nieuport is Colin's and his co-workers tribute to just one fallen airman.