Another somewhat cropped photograph from Allan Bowman shows the Short S.25 Sandringham  4 VH-BRC anchored out at Lyttelton Harbour in November of 1957. 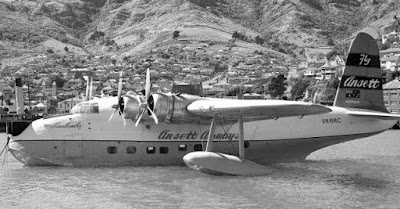 A brief history of this aircraft follows.
This airframe began life at the Short and Harlands factory at Belfast in Northern Ireland as a Mark III Sunderland with the c/n SB.2018 and was allocated the Royal Air Force serial number of JM715 but was converted to a GR Mk5. It was then converted to a civilian Sandringham 4 by April 1947.
It was acquired for Tasman Empire Airways Ltd and became ZK-AMH from 29-05-1947 and given the name 'RMA Auckland' and departed Poole Harbour on delivery to NZ on 15-10-1947.
It was sold in about may of 1950 and became VH-BRC with Barrier Reef Airways Ltd of Brisbane from 22-09-1950 before transferring to Ansett Flying Boat Services from 19-12-1952 with whom it was named 'Beachcomber' and based at Sydney's Rose Bay.
This aircraft was charted on several occasions to to carry out flights to/from the Chatham Islands and also carried out a camera ship role in 1957 - as in the photo above - note the unusual nose addition.
See this link :-
http://3rdlevelnz.blogspot.co.nz/2014/07/ansetts-service-to-chatham-islands.html
It departed Sydney on 28-11-1974 to become N158C with Antilles Airboats out of St Thomas and they named it 'Southern Cross'.
After a burst as VP-LVE with the same operator it returned to its N158C marks and after a couple of other ventures eventually made it to Calshot in February of 1981 for the British Science Museum and was stored on the Lee-on-Solent.
On 02-03-1983 it was barged to Southampton for some refurbishment and went on display at the Southampton Hall of Aviation in its Ansett VH-BRC Beachcomer scheme.