New Zealand's Beech King Air population has climbed to 16 aircraft with the recent arrival of 200 series ZK-MDC and 300 series VH-WCN.

ZK-MDC arrived in Auckland 11 April 2016 as N595BC having crossed the Pacific Ocean from Merced via Honolulu and Pago Pago. It flew onto Ardmore that evening for ferry tank removal then made its way to its Wanganui the following day with a brief local across to Palmerston North and back that afternoon/evening. It also visited Nelson and Dunedin whilst carrying its N markings before ending up back at Palmerston North for certification and entry to the ZK register. The aircraft carries small Air Wanganui Commuter titles just forward of the main entry door. 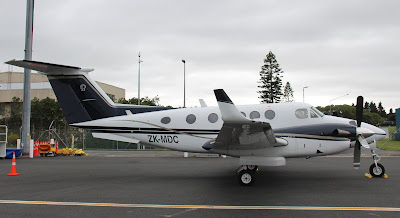 While not expected to become ZK registered, King Air 300LW VH-WCN is a recent arrival to our shores and will reside at Ardmore for the time being:
http://mrcaviation.blogspot.co.nz/2016/05/beech-300lw-king-air-vh-wcn.html