After completing his Sorrell Guppy (ZK-JGK), Alan wanted a two seater to fly in comfort, so he combined a Pietenpol fuselage with a canopy mated to a modified Jodel D 18 wing to produce a very useful aircraft.  Its spring steel undercarriage is also an Alan Belworthy signature which makes for good ground handling and paddock operations. 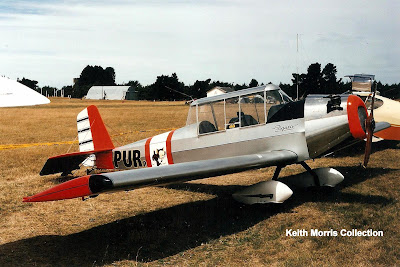 ZK-PUR is photo'd here at the 2001 SAANZ Flyin at Ashburton.