I posted about the histories of the Titan Tornado population of New Zealand at www.nzcivair.blogspot.co.nz/2014/12/titan-tornados-of-new-zealand.html  The last Tornado I included was our only Tornado 1 single seater, being ZK-TRT which was built by Trevor Tollison at Wairoa.  After several owners it was listed to AM Smith of Winchester and was noted as being returned to airworthy status. 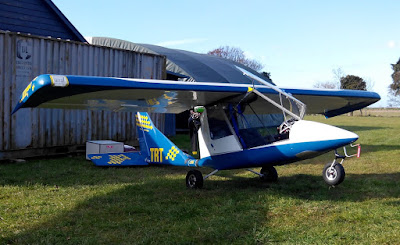 Arthur Smith has been in contact and has kindly sent the above photo of ZK-TRT.  Arthur advises that his aircraft is now up and flying again with an increased MAUW of 750 pounds (340 Kg).  ZK-TRT is currently listed for sale on Trade Me if you are interested.


Thanks very much for the update Arthur.
Posted by Sir Minty at 14:45