The Eagle Has Landed! (Twice)

Following on from Mike Condon's recent post on the Thunderbirds look-a-like Calidus Fern gyrocopter ZK-OTM, I thought I would carry on with the space theme (with thanks to Neil Armstrong!). I photod these two Eagles landing at the recent Northern Microlight Club fly-in at Parakai after their flight from Tauranga.

The Europe MT 03 Eagle gyrocopter is becoming common in New Zealand skies with local agents Gyrate NZ Ltd of Tauranga having registered 8 machines to date, following the registration of their first machine ZK-RGG in October 2006. All of these gyrocopters are painted in identical silver schemes (at least the ones I have seen). Gyrate NZ Ltd have a good website http://www.gyrate.co.nz/ which is worth a look. 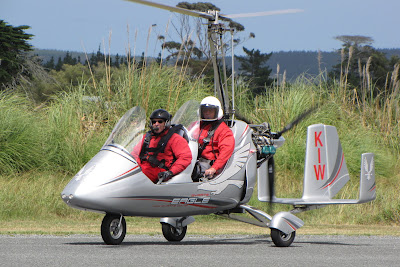 The first Eagle to land was ZK-KIW which is owned by Gyrate NZ Ltd. The Eagle has an empty weight of 239 Kg and a maximum take off weight of 450 Kg, and from the photo above it is obviously a practical cross country machine for two gyronaughts! It cruises at 80 knots and has a range of around 500 kilometres. 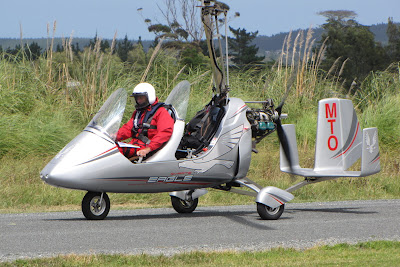 And the second Eagle to land was ZK-MTO which is owned by DM and PM Hall of Te Awamutu.

Oscar Stielau of North Shore has recently purchased Eagle gyrocopter ZK-RBG to add to his fleet of sport rotorcraft that he bases at Parakai.