The Squirecraft Cavalier was a redesign of the Minicab by Stan McLeod of Calgary, Canada.  The SA 102.5 model first flew in February 1971, and features a swept tail, wingtip tanks and a spring steel undercarriage that could be built in tailwheel or tri-gear configuration.  The tri-gear version is faster.

We have had 4 of these aircraft built in New Zealand as follows: 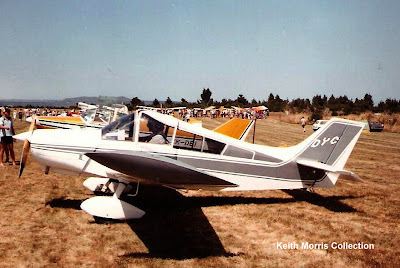 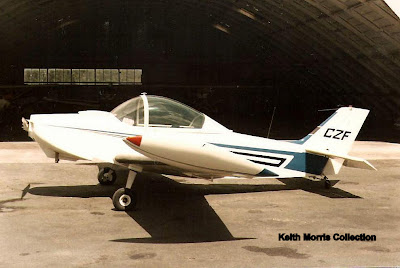 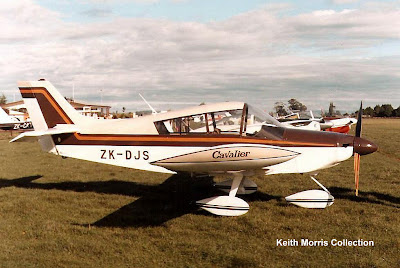 Our third Cavalier was the tri-gear ZK-DJS (c/n AACA/250) which was built by Dave Stewart of Te Aroha, and was first registered on 2/2/84.  It is still current and registered to Dave Stewart, but I think it is now flown by his son.  The above photo was taken at the 1986 AACA flyin at Matamata. 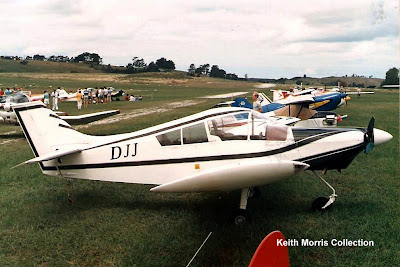 And our fourth Cavalier was ZK-DJJ (c/n AACA/199) was built from plans by Gunter Barthel of Auckland.
It was first registered on 15-04-1986 and its first flight was at Hobsonville on 5-07-86.
It was photographed above at the 1988 AACA flyin at North Shore.
Gunter moved to Australia and flew ZK-DJJ from Kerikeri to Norfolk Island on 12-01-2009 and on to Lord Howe Island the following day.
It was cancelled from the New Zealand register on 2-03-10, and was re-registered in Australia as VH-EJJ on 17/3/10.  It is still owned by Gunter Barthel.