Pober Pixies of New Zealand (Only One to Date)

The Pober Pixie was designed by the EAA President Paul Poberezny in 1974, in response to the 1970's oil crisis, as an economical sport aircraft.  It was based on the Heath Parasol.  It is fabric covered and features a welded tube fuselage and spruce wings with full span ailerons for a good roll rate,  Length is 17 feet 3 inches (5.26 metres) and wingspan is a long 29 feet 10 inches (9.09 metres).  Its empty weight is 543 pounds (246 Kg) and MAUW is 900 pounds (408 Kg).  We have had only one Pober Pixie in New Zealand to date, but plans are still actively marketed and maybe we will see others in the future. 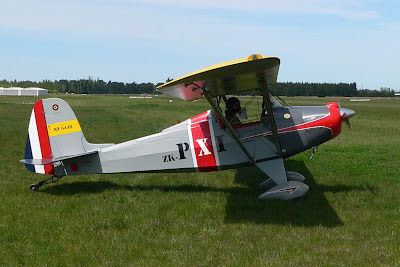 ZK-PXI (c/n MFS 1) was built by Mike Sheffield of Kaiapoi and was first registered to him on 8/6/09 as a Class 1 microlight.  Mike already had the plans to build a Pixie when an uncompleted project came up for sale on Trade Me.  He bought the project and completed it and four and a half years later he had this neat aeroplane.  It has a VW engine swinging an Ian Henry propeller.