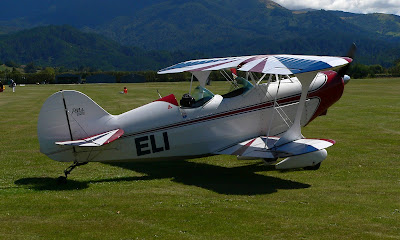 Here we have recent photos of three Motueka locals. Above - one of three locally based Pitts Specials - ZK-ELI is an open cockpit S2E model with the c/n NZ201. Built up from a kit imported by Airspares (NZ) Ltd for/by Hank Courtenay of Lower Hutt and registered on 13-01-1981. It is currently listed to Vincent and Alison D'Ath, who also operate the Aerotek Pitts S-2A ZK-UFX under the Tasman Bay Aviation Ltd banner. Interesting story behind the scene about the operation of ELI - but that (as they say) is another story.

De Havilland DHC-1 Chipmunk N861WP (c/n C1-0748) of Eugene J Demarco of Wellington. It was originally built for the RAF and serialled WP861 (from whence its current registration comes) before heading to the USA to become N65273 followed by N861WP from April 1984. It came to NZ in about 2004 and is normally based at Masterton. It is temporarily based at Motueka. 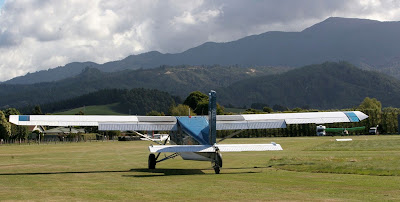 Andy Heap Pic.
Olde "653" trundling out with another load of meat bombs. Pilatus PC-6/B2-H4 ZK-XIT (c/n 653) is ex Aussie Army and previously ZK-JML - with a couple of other registrations hidden in there somewhere. If it wasn't for the distant underwing items [houses, camper van and Dragonfly ZK-DGF] this shot could almost be in another time and place.
Posted by Dave Paull at 05:19