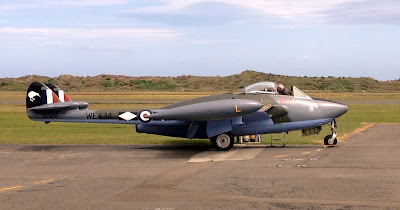 De Havilland DH 112 Venom MkI ZK-VNM3 (c/n 840) was spotted out at Wanganui today by Beau.
This airframe was one of 250 built for the Swiss Air Force by the Federal Aircraft Factory (FAF) at Emmen and allocated the Swiss serial number J1630 in 1956.
By July 1984 it was in the hands of Halos AG/Foundation Pour Le Maintien du Patrimoine Aeronautique at Lausanne and was allocated the Swiss civil registration of HB-RVA and after a four year restoration first flew in civilian hands on 22-06-1988 at Altenrhein.

Nice pic of it in Swiss markings on this link - Note civil HB-RVA under tail :-
https://upload.wikimedia.org/wikipedia/commons/0/0d/Venom_De_Havilland_DH-112.jpg
By August of 2002 it was with Pegus AG/Wilbur Sammlung and operated by the Swiss Flying Museum.
The Swiss civil registration was cancelled and the aircraft was noted at Ardmore in March of 2012.
It was registered in NZ on 10-10-2012 to John Luff's Wanganui Sea and AirCharters (2006) Ltd. and painted to represent Venom WE434 which was an aircraft on lease from the RAF Far East Air Force to 14 Squadron of the RNZAF.
Note the white Kiwi no the black rudder.
It first flew as ZK-VNM3 from Ardmore on 11-11-2012.
Posted by Blue Bus at 16:01