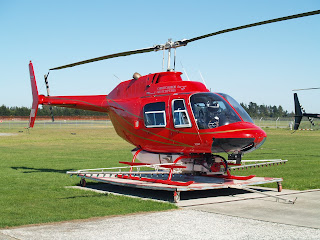 Christchurch Helicopters have formed an agricultural unit at Christchurch Airport, with a couple of machines at present. Friday last (9 October) was an auspicious day for B206B ZK-HRS, when it undertook its first spraying job in North Canterbury. This machine (c/n 877) was imported from Japan by John Shivnan's Rotorflite, and first registered on 1 Feb 2000. On 5 Jul 2000, operation transferred to Rick Lucas Helicopters and for the next 14 years it undertook tourist and commercial work out of Wellington and other company bases. With the demise of that company last year, the helicopters were stored at Palmerston North, and ZK-HRS escaped cofinement through the tender process earlier this year. The spray gear came with the helicopter, but it seems unlikely it was ever used in Rick's tenure. The other machine used by the agricultural unit is the recently-delivered AS 350BA ZK-HOQ (c/n 1912) from France, where it operated as F-GDXR.
Posted by greybeard at 20:39